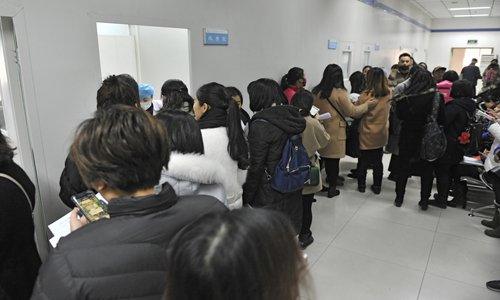 Since entering the Chinese mainland market in mid-2017, two HPV vaccines to prevent the onset of cervical cancer have continued to boom. However, the speed in demand for such vaccines on the mainland is far outpacing the speed of trade and domestic research, leaving women to continue resorting to overseas treatment, particularly in the Hong Kong Special Administrative Region.

When two types of vaccines against the genital human papillomavirus (HPV) - a sexually-transmitted infection strongly linked to the onset of cervical cancer - were introduced to the Chinese mainland in mid-2017 to fill a much-needed market blank spot, no one could have anticipated how quickly the demand would explode. As a result, domestic medical companies have dove into research to keep up with the overpowering requests for HPV vaccines.  One patient in Shenzhen, South China's Guangdong Province, who only gave her surname as Wang, said she has just had the first shot of a three-dose quadrivalent HPV vaccine series and is waiting to take the second.  She said she decided to have the injection done at a community health service center near her home as her son had been treated there in the past. "My son had children's vaccines done there at the health center so we had already built a contact. Several weeks ago, I was informed by them via their app that they had 'limited stocks' of the quadrivalent HPV vaccine, so I called them to book a consultation and later had the injection done," she explained, adding that she didn't need to make an official appointment but rather just turn up and use the center's walk-in service. Waiting to be vaccinatedCurrently, there are two types of HPV vaccines sold in the mainland market, the bivalent Cervarix vaccine developed by UK-based drug maker GlaxoSmithKline (GSK), which protects against the two most aggressive HPV strands, namely 16 and 18, and the quadrivalent Gardasil vaccine produced by US-based Merck & Co, which protects against the four most aggressive HPV strands, namely 6, 11, 16 and 18.Cervarix was introduced to the mainland in July 2017 whereas Gardasil was introduced four months later. Both vaccines are being warmly welcomed by women on the mainland, especially due to their increasing health awareness. According to GSK, it has cooperated with Ali Health, the healthcare arm of Chinese e-commerce giant Alibaba, to allow patients to make appointments for the vaccine online. So far, about 5,000 women have booked an appointment on Ali Health since the program started in August 2017 and more than 300,000 patients have had online consultations, GSK told the Global Times on Friday. "We have worked with relevant organizations to conduct public education to raise their disease prevention awareness," GSK said. For example, the company has been conducting education programs for primary and high school girls in Qiaokou, a district in Wuhan, capital of Central China's Hubei Province. GSK also said that immunization coverage in the district - the percentage of women and girls who have actually been vaccinated out of all those who are eligible to be vaccinated - has reached 6 percent, compared to a 1 percent immunization coverage rate for influenza. The market for the quadrivalent Gardasil vaccine is also hot. On Friday, the Global Times consulted several busy community health service centers in Shanghai that provide HPV vaccination services. One of them, based in Jing'an district, said that patients will be able to make appointments only for around September. Another, located in Huangpu district, said that customers can make an appointment now but need to wait until about June to get vaccinated. The Global Times also contacted the disease control center in Wuxi, East China's Jiangsu Province on Friday and was told that HPV vaccines are currently out of stock in the city. According to a report published by the Beijing News in February, many clinics in Beijing had also sold out of the quadrivalent HPV vaccine.Demand exceeds supply Lu Ye, a Shanghai-based medical employee with knowledge of the vaccine selling industry, told the Global Times on Sunday that the HPV vaccine market on the Chinese mainland is far from being saturated yet.On the one hand, supply of and research on the vaccine is inadequate. "The number of players in the market, whether they are developers or sales agents of such vaccines, is very small. Particularly for vaccine makers, a company needs a very long period of clinical time to sell their vaccine products, and therefore, only few medical companies - those with abundant financial resources - dare to invest in research and development of the vaccine," Lu said. So far, four or five domestic firms have already conducted first-phase clinical trials for HPV vaccinations, according to media reports. But Lu said that in the short term, China will still need to largely rely on overseas imports for quality. Patients the Global Times spoke to said that they feared the short supply of imported vaccines might get worse, so they chose to get vaccinated as soon as possible. GSK said it will mount up efforts to guarantee its supply of HPV vaccines on the mainland is "adequate" and "stable." On the other hand, the rising awareness of women's healthcare has been pushing patients to look beyond the mainland border, particularly Hong Kong,  which has more adequate and diversified HPV vaccine products. In March 2016, the nonavalent Gardasil 9 vaccine developed by Merck was imported into Hong Kong, a more valent vaccine that protects against nine different HPV strands, namely 6, 11, 16, 18, 31, 33, 45, 52 and 58, types that cause the majority of HPV-related cancers. In terms of target audiences, both the nonavalent and quadrivalent vaccines target patients between 20 and 45 years old, while the bivalent HPV vaccine is suitable only for women and girls under 25 years of age. A Hong Kong-based resident who recently had the nonavalent HPV vaccine in Hong Kong said that in some clinics there, patients need to wait for about six hours to get vaccinated at the weekend, she told the Global Times on condition of anonymity. "Most of Hong Kong's HPV vaccine patients are from the mainland," she said, adding that the hot demand from mainland patients has even pushed the price of the nonavalent HPV vaccine in Hong Kong from 3,500 yuan ($553) in 2016 to about 8,000 yuan currently.