The HPV vaccine, which can prevent cervical cancer, had until recently been unavailable for people living in the Chinese mainland, leaving women with no other choice than a costly trip to Hong Kong or even further afield. However, over the past two years the CFDA has approved 2-, 4- and 9-valent HPV vaccines, which means women are now able to get treatment closer to home.

In countries such as Australia, America and Scotland, the HPV vaccine is a part of the national immunization program, and is therefore free. However, in Chinese mainland, there was no access to the HPV vaccination until July 18, 2016 when GSK, one of the two HPV giants whose vaccines have been approved and listed around the world, announced that Cervarix, a 2-valent HPV vaccine which is applicable to women aged 9-25, had been approved by CFDA. The announcement marked the first HPV vaccine to be approved in Chinese mainland. 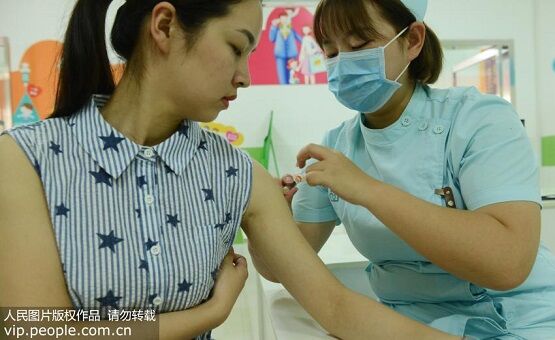 On Aug. 3, 2017, a nurse vaccinates a resident with the HPV vaccine in Zhengzhou, central China’s Henan province. (Photo: people.com.cn)

Before this milestone, mainland female residents had chosen to travel to Hong Kong or even abroad to get vaccinated, which was costly in both time and money. Statistics show that nearly 2 million mainland women made the journey to Hong Kong for HPV vaccination annually.

Cervical cancer is the second most common cancer among Chinese women, and around 10,000 women catch the disease every year. 99 percent of incidences are caused by persistent infection of one or multiple kinds of high risk HPV. It’s the only cancer yet that can be prevented through vaccination.

There are three kinds of HPV vaccines, 2-, 4- and 9-valent, around the world today. The valent represents the variety of viruses that the vaccines can prevent. Research shows that 2- and 4-valent vaccines can prevent 84.5 percent of cervical cancer caused by infection while 9-valent can prevent 92.1 percent.

It’s said that the HPV virus which causes cervical cancer is mainly transmitted through sexual intercourse, with a high infection rate. It’s best for girls to get vaccinated before they start having sex.

On May 29, 2018, it was announced that Cervarix, which was previously only available to women aged 9-25 years, will expand its age range to 9-45 years, which is good news for older women who want to get vaccinated and help prevent cervical cancer.

On May 31, 2018, China’s first Gardasi 9 was used in Hainan province. Gardasi 9 is currently in short supply around the world. It's already out of stock in a number of developed countries and regions, Hong Kong included. In China, Gardasi 9’s producer MSD has already started putting products on the Chinese market, and it's said that Gardasi 9 may be in Beijing before the end of the year.