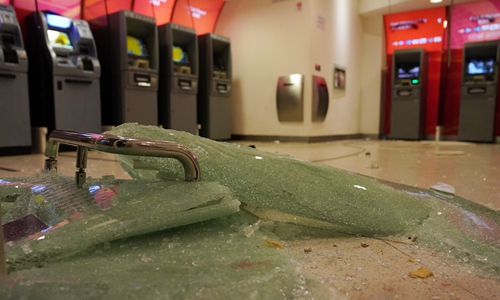 The public has urged UK-based banking giant HSBC to speak out on the national security law, which would be implemented in China's Hong Kong Special Administrative Region (HKSAR), to regain the trust of its clients after it allegedly played a role in funding Hong Kong riots and was involved in the arrest in Canada of Meng Wanzhou, chief financial officer of Huawei.

Former Hong Kong chief executive Leung Chun-yan on Friday exhorted the public, especially Hong Kong authorities, businesses and residents, to act against the HSBC bank to let British companies know "on which side their bread is buttered," saying "one week has passed, HSBC still hasn't expressed its position on the national security law," media reported.

The post has gained wide support from netizens. Some urged the company to speak out on the national security law, otherwise they would boycott it.

The Global Times failed to get a response from HSBC about the issue as of press time.

Mei Xinyu, a research fellow at the Ministry of Commerce's Chinese Academy of International Trade and Economic Cooperation, told the Global Times on Monday that if the company wants to continue doing business in the Chinese mainland and HKSAR, it needs to follow China's law to regain the trust of the public.

"HSBC speaking out for the bill is a necessary step to avoid further public mistrust," Mei noted.

HSBC's alleged involvement in Meng's case and Hong Kong's riots has already cast a shadow on its reputation and credibility, and now many people said its reluctance to comment on the national security law could cause further damage to its interests in China.

According to a report in the Wall Street Journal, a monitor appointed by the US government to oversee HSBC's anti money-laundering controls flagged "illicit transactions" made by Huawei at the bank and shared them with New York prosecutors. That led to the arrest of Meng.

Also, the bank reportedly channeled funds to Hong Kong rioters and then shut the funding accounts, according to media reports.

Tian Feilong, a Hong Kong affairs expert and associate professor at Beihang University in Beijing, told the Global Times that local companies should voice their support for the national security law, which serves the common interests of these companies, as the law can safeguard social stability in the region and thus ensure that trade and business proceed smoothly.

Although HSBC is based in London, most of its profits come from Asia, particularly Hong Kong. According to the bank's financial results for the fourth quarter of 2019, the adjusted profit before tax in HKSAR reached $2.6 billion, accounting for almost 60 percent of the group's total during the period.