The Wusongkou liner, a classic four-hour sightseeing cruise on the Huangpu River, will resume operation on Saturday after being docked since 2012. 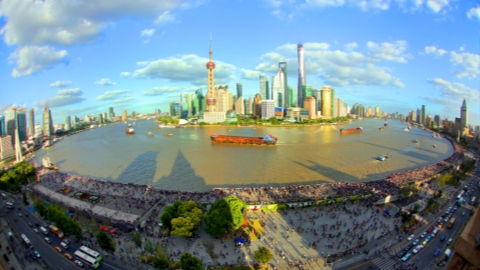 The tour starts from the Shiliupu Dock and then turns around and comes back when the ship reaches Wusongkou. The sightseeing tour will be operated every weekend. The ticket price is 280 yuan (US$44) during the trial period.

A string of landmark buildings and spots on both banks of the river will be appreciated during the trip, including the Oriental Pearl TV Tower, Jinmao Tower, Shanghai World Financial Center and Yangpu Bridge.

The Yangshupu Water Plant, which was opened in 1883 and features British-style castle architecture, and Yangpu Power Plant built in 1913 by British merchants, will also feature on the cruise.

The ship has been docked for several years since the majority of passengers on Huangpu River sightseeing boats were once tour groups who pursued short tours due to tight schedules.

During its six years out of operation, though, local residents and expats have made many inquiries over its suspension, Shanghai Huangpu River Cruise Co, operator of cruise ship tours on Huangpu River, said.

Unlike traditional short cruise trips on the river, the resumed daytime tour will be a more in-depth travel experience. There will be tour guides introducing landmarks along both banks of the river, and folk cultural performances with a Shanghai flavor will be presented.

A variety of Shanghai snacks will also be served on the ship, which has the capacity to carry 450 passengers.

The tour is being resumed as the city aims to make the iconic Huangpu River cruise a world-class attraction, as well as attracting local residents and expats.