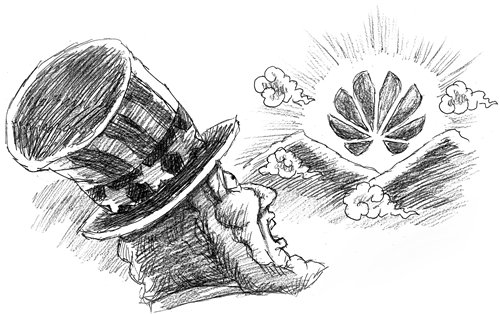 Chinese telecom giant Huawei has drawn global attention with its new triple-camera smartphone, ahead of the Mobile World Congress. It shipped 153 million smartphones in 2017, taking a 10 percent share of the global market. In the Chinese market, the company has absolute dominance with a market share of 19 percent. However, its path to the US market has proved bumpy. AT&T pulled out of a proposed deal with Huawei due to pressure from the US government. Verizon dropped its cooperation plans as well after that. But these US difficulties have not stopped Huawei from growing, and the company's success could offer a solution for US-China trade frictions.The US has long been on the alert with Chinese companies because of its concerns about national security and information safety. In 2012, the US launched an investigation into Huawei, claiming it posed a threat to national security. Since US President Donald Trump took office, recent policies have put even more emphasis on protecting the US market and national interests. Apple is a symbolic US corporation and is facing a strong competitor in Huawei. Thus, the US does not want to open its market to the Chinese firm. More importantly, Huawei is trying to expand its 5G technology, which it might use in emerging industries such as Artificial Intelligence and smart vehicles. So the US is now trying to close up the market and build its own 5G network.There will be losses from the failure of Huawei's planned deals with the two US telecom giants. But it will not halt the momentum of the company, which is determined to take the leading position in the global smartphone market. So far, according to media reports, Huawei has a market share of more than 15 percent in 33 countries. The key to Huawei's success is innovation and valuing manufacturing development, which aligns with the strategy of "Made in China 2025." Huawei values its intellectual property protection. Its research and development (R&D) expenditure increases every year, and has reached more than 10 percent of its sales revenue. By the end of 2016, it had garnered 62,519 patent licenses, 90 percent of which are invention patents. Meanwhile, Trump's State of the Union speech again revealed his protectionist attitude. And a higher trade deficit with China in 2017 gives Trump an excuse to wage a trade war. But such a trade war would hurt both sides. China would like to solve the problem through talks, but if negotiations do not succeed, China and Chinese companies will have to come up with a plan.Huawei could point the way in this regard. Instead of counter measures, China should strengthen its own manufacturing industry. The "Made in China 2025" policy was unveiled in 2015, proposing the goal of transforming China into a leading manufacturing power via a 10-year action plan. The domestic manufacturing industry needs to elevate its innovation ability, and the government will provide policy support and a legislative environment to encourage innovation. Chinese companies should learn from Huawei, as the current problem for many of them is a lack of innovation. Many firms have R&D spending of less than 2 percent, and they generally do not adopt enough standardization and advanced technology. The policy of encouraging multinationals like Apple to move their operations back to the US has put more pressure on the transformation of the Chinese manufacturing industry. If the manufacturing industry in China does not strive for innovation and development, it will be eliminated by modern technology, even without the US difficulties. Fundamentally, it is the competition between the two countries' manufacturing industries that is behind the looming US-China trade war. Some Western countries have been very sensitive about the "Made in China 2025" plan, but China has to develop its manufacturing industry in spite of the noise from outside. China must develop its high-end manufacturing industry, as that is something that cannot be held back by the US.