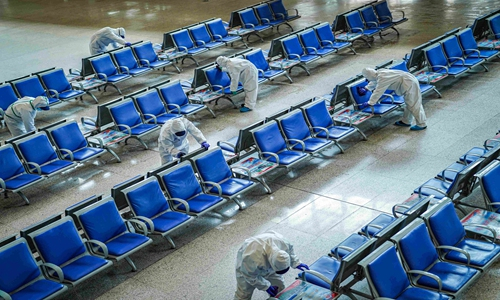 Authorities in Central China's Hubei and East China's Jiangxi provinces are investigating an incident on the provincial border on Friday, which had police on both sides involved.

Regarding the claim on the internet that Jiujiang police of Jiangxi had beaten Huangmei police of Hubei, Jiujiang officials said the actual situation and that which is circulating online are different, and the details of the process are still being clarified.

The incident happened on a bridge over the Yangtze River, which connects Jiujiang and Huangmei county. Several video clips circulating on China's social platforms show encounters between police on both sides, with local residents involved.

Witnesses claimed that Jiujiang police crossed the provincial border and set up a blockade at the bridgehead on Huangmei's side, which caused the incident. A video recorder claimed that the incident happened after traffic police on the Jiujiang side banned Hubei's vehicles and personnel from entering Jiujiang.

Huangmei people who need to resume work after Hubei lifted the lockdown have to take a train from neighboring Jiujiang across the river as there is no railway station in the county.

Starting Friday, the Jiujiang authority has arranged a shuttle bus to pick up Huangmei people and send them to the railway station directly, according to media reports.

A Jiujiang official said that Huangmei people can cross the bridge as long as they have related certifications.

The video clips have sparked internet outrage. Some netizens accused Jiujiang police of discriminating against Hubei people because of the COVID-19 pandemic while some denied that.

The incident triggered a large confrontation. Videos show that some people didn't wear masks. In a video, an official of Huangmei county told the crowd that governments on both sides were in a discussion in a bid to solve their problems.

He persuaded the crowd to leave the scene and wait at home, saying that it was very dangerous to gather on the bridge and there was a risk of cross infection of coronavirus.