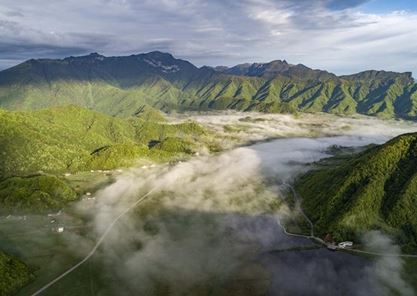 Shennongjia, a forest-covered region in Central China's Hubei Province, reported a new coronavirus case with a longer-than-normal incubation period of 27 days, after the region had reported zero new cases for more than two weeks.

The new case, a 70-year-old Shennongjia native surnamed Jiang, felt symptoms including fever and fatigue on Wednesday night, and went to a local hospital the next day where he tested positive for the coronavirus.

Until Wednesday, he had felt normal since his return by private car to Shennongjia from Ezhou, a city in eastern Hubei, on January 24, disclosed the local government of Shennongjia on its official website.

Jiang has a sister in Ezhou who reported coronavirus-related symptoms on January 25 and tested positive for the coronavirus on February 2. Jiang spent three days living and eating with his sister when he was in Ezhou. He had no close contact with any other person after he returned to Shennongjia.

That means that for Jiang, the disease's incubation period has lasted at least 27 days, almost double the generally believed 14 days.

This is also the first new case Shennongjia has reported in 16 days. It was the first region in Hubei to report zero daily new infections, earning it a reputation as the "safest" part of Hubei.

The reported case has frightened many netizens, who said on China's Twitter-like Sino Weibo that people should not let their guards down.

"I thought the epidemic was approaching its end. I didn't figure it was just the beginning," one Chinese netizen wrote on Weibo.

Zhou Zijun, a professor at Peking University's School of Public Health, told the Global Times that this is just an individual case and people don't need to exaggerate its significance.

"So far the incubation period is less than 14 days for almost all coronavirus cases. I don't suggest a massive policy response like extending the quarantine period due to random exceptions," he said.

Shennongjia is also known for its frequent sightings of mythical wild men. There have been hundreds of reported sightings of half-man, half-ape creatures in the region.