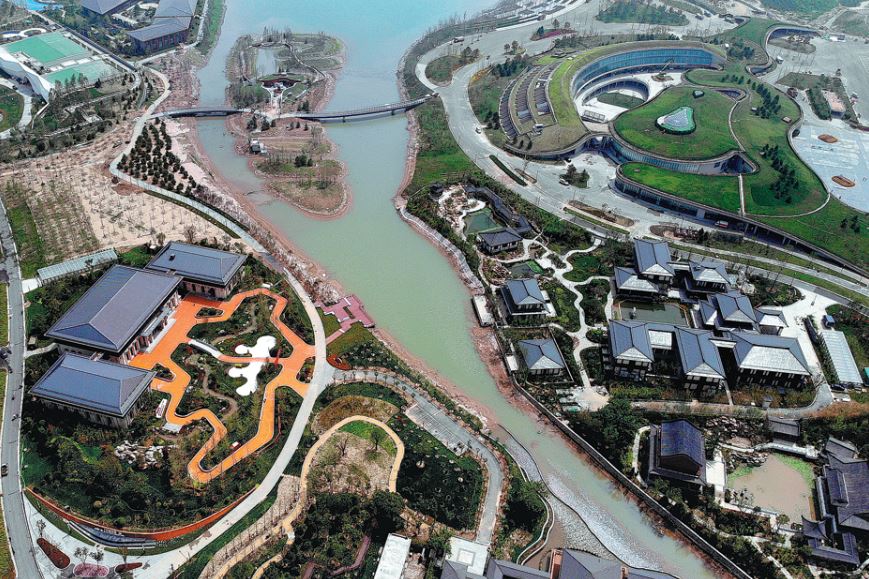 An aerial view of Xiong'an Jiaoye Park in Xiong'an New Area, Hebei province. The park, construction of which was completed in June, is about 1.5 times the size of the Olympic Forest Park in Beijing. (Photo: Xinhua)

As Yang Dandan, a 33-year-old resident of Hebei province's Xiong'an New Area, could no longer wait to see the new park near her home, she went there last week, although it's not officially open yet, and was surprised by its scale and beauty.

Covering 18 square kilometers, Xiong'an Jiaoye Park－Jiaoye meaning outskirts with green areas－is about 1.5 times the size of the Olympic Forest Park in the north of Beijing.

The park is located in the northern part of Xiong'an Rongdong region, one of the first batch of places to be built up in the new area and also a place to accommodate some of the relocated villagers, such as Yang.

Established in April 2017, Xiong'an is a new economic hub near the capital. It will play a significant role in the country's national strategy involving the coordinated development of the Beijing-Tianjin-Hebei region.

Building green and ecologically pristine areas to make the new city livable is one of its priorities. According to an official development outline for Xiong'an released in April 2018, a park system will be established in the area to satisfy residents' need for a high-quality ecological environment.

In the future, residents anywhere in the area will be able to enjoy park resources within a distance of 300 meters. The area's green coverage ratio will reach 50 percent, according to the outline.

Construction work on Jiaoye Park commenced in March last year and was completed in June. The park will open soon, Peng said.

The park has 14 forested areas, as well as 14 city-themed pavilions exhibiting specialties from the province's 11 prefecture-level cities, two county-level cities and Xiong'an. In addition, there is a main pavilion featuring green expos of the area. For example, the Cangzhou pavilion theme centers on Chinese martial arts, while the Zhangjiakou pavilion focuses on sports.

"The park is so huge that I will only be able to see all of it if I have three days to spare," Yang said.

She said there were no large-scale parks near her current home in Anxin county, which is part of the Xiong'an New Area, together with Rongcheng and Xiongxian counties.

"The park is a great place for us locals and provides colorful entertainment for children and adults," she said, adding that her parents would like to go strolling here.

According to Peng, the park is also designed as a natural scenic spot for people in other cities of Hebei, as well as neighboring Beijing and Tianjin. "As far as I know, the park is the largest of its kind in the country," he said.

Residents of Beijing can easily get to the park after driving about an hour along a new expressway linking Beijing and Xiong'an－Jing-Xiong Expressway－he said, adding that the park is near an exit of the expressway.

The park will have about 500 hotel rooms serving tourists after it opens to the public, which is scheduled soon, Peng added.