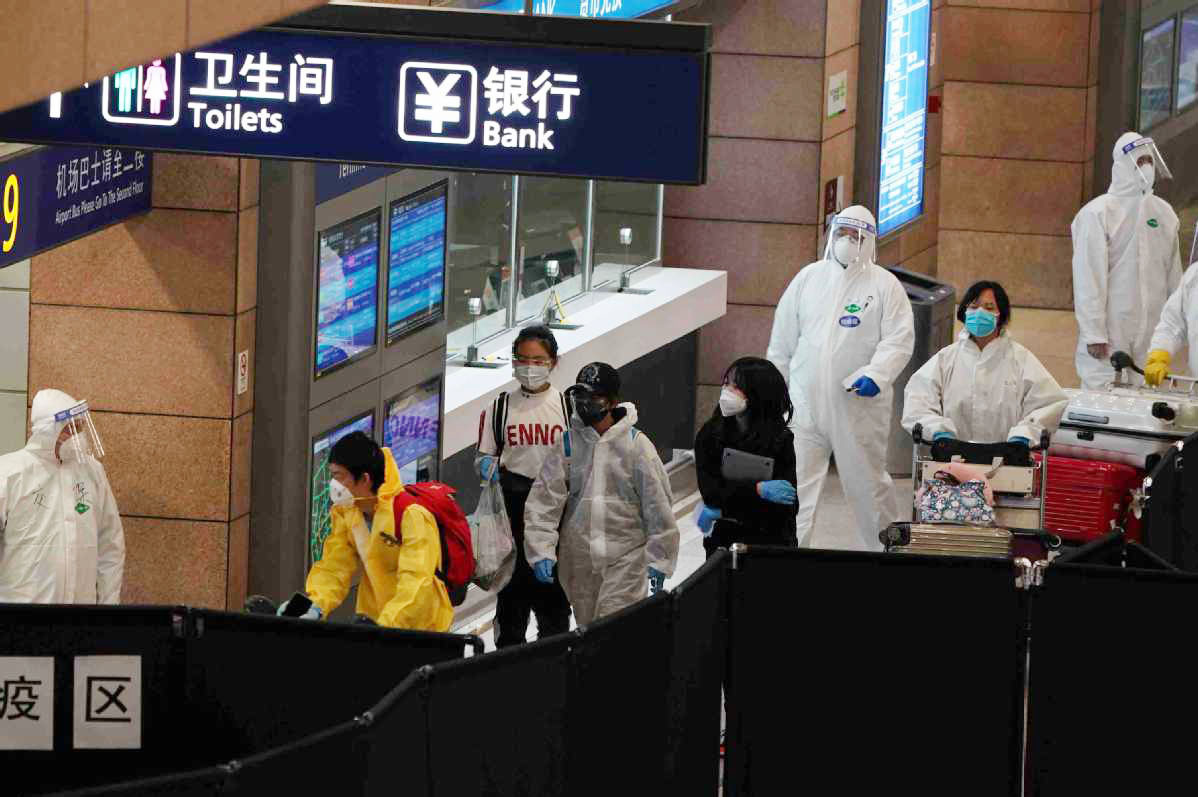 Some of the 180 teenage Chinese students arrive at Shanghai Pudong International Airport on Sunday after taking a chartered flight from San Francisco as part of China's plan to bring young Chinese students back home amid the COVID-19 pandemic. (Photo: China Daily)

Hundreds of Chinese students studying overseas have returned to China taking State-organized chartered flights as the country stepped up efforts to bring more home amid the ongoing COVID-19 pandemic.

On Sunday at 5.40 am, a China Southern Airlines flight from New York's JFK airport carrying about 200 Chinese teenagers landed at Guangzhou Baiyun International Airport in Guangdong province, according to AirSavvi, a Chinese aviation data and solution service provider.

The three flights are among the State-led chartered flights involving the coordination of the Chinese government, State-owned carriers and related departments to bring underage Chinese students home.

Due to the large number of cancellations of international flights, Chinese students who study abroad found it nearly impossible to get a return trip from commercial airlines.

"Only a nation that has a strong international aviation business can summon up sufficient resources to offer timely assistance in emergency situations," said Chen Zhuo, a senior analyst with China Merchants Securities.

According to Zhao Lijian, a spokesman with the Ministry of Foreign Affairs, the central government has always been highly concerned and cared about Chinese students studying overseas.

"Considering the large number of overseas Chinese students, especially those younger ones and the difficulties they are encountering, the Foreign Ministry is coordinating with other government divisions to arrange temporary flights to return young Chinese students back home gradually and in an orderly manner," Zhao said at a news conference last week.

On April 3, China Eastern sent an aircraft to London's Heathrow Airport to return about 180 Chinese students to Ji'nan in Shandong province.

Jin Junhao, an official at the Civil Aviation Administration of China, said at a news conference that as of 4 pm on Monday, China had sent seven chartered flights this month that have brought back 1,278 Chinese citizens from the United Kingdom, the United States, Italy and Spain, including 1,067 students.

Since March, there have been a total of 16 chartered flights that have brought more than 2,700 Chinese nationals back from overseas, according to the CAAC.

"The CAAC will continue to work with other departments to help overseas students who have real difficulties in affected countries and an urgent need to return to their home country," said Jin.