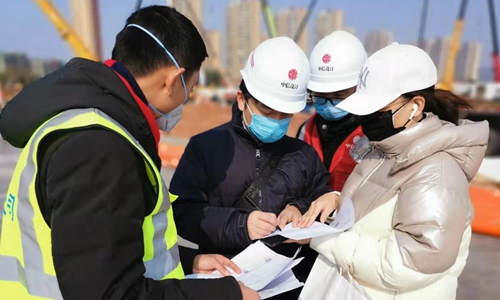 Chinese builders would like to share their experience in designing Wuhan's makeshift hospitals to countries in need, said a technical expert who worked on the Huoshenshan Hospital, the emergency field hospital that exemplified the country's efficiency and dedication to fighting the COVID-19 outbreak.

Huoshenshan Hospital was built in only 10 days in Wuhan, Central China's Hubei Province, and treated 3,035 patients as of March 20, according to the PLA Daily.

The CITIC General Institute of Architectural Design and Research was in charge of designing Huoshenshan. Xiao Wei, the company's vice director, told the Global Times on Thursday that the company has received inquiries from foreign countries about building similar hospitals, and might cooperate with these nations on some epidemic prevention projects.

"We are pleased to participate in these projects abroad and share our wisdom and designs with the world," he said.

He continued to note the original blueprints and drawings of the Huoshenshan Hospital, which they completed within only 60 hours, have been made available to the public, keeping some dishonest companies from using fake blueprints to cheat clients.

According to Xiao, the Huoshenshan Hospital was based on the design of the Xiaotangshan Hospital in Beijing, which was built to treat SARS patients in 2003. Some adjustments and improvements were made to the design to adapt to the climate in Wuhan, including 5G technology, the ventilation system and isolation measures to protect medical staff and patients.

The technical expert said that the hospital included 5G coverage and wired broadband, which were used to connect to a remote consultation platform that had been set up so that experienced doctors in other provinces around China would be able to conduct remote consultations with patients in Wuhan.

He added that the livestreaming of the hospital's construction and the millions of Chinese who watched online played an important role in giving staff the encouragement they needed to complete the difficult task. "It feels unbelievable to see that millions of people are supervising your work online," he said.

The biggest challenge when building the Huoshenshan Hospital was time. However, with broad cooperation, the team achieved the miracle of building the hospital in 10 days.

The design team was divided into two parts: one for design and the other for coordinating workers at the construction site. The members of both teams were top designers and engineers in various fields. Their experience and knowledge allowed them to cooperate and quickly make decisions on what problems could be solved on the spot. They also shared their evolving experience with the team in charge of building the Leishenshan Hospital, the sister field hospital to Huoshenshan.

"It might be a good idea to change the Huoshenshan Hospital into a museum to show the stories that happened there and convey the spirit of the Chinese people as they united to fight against the rampaging novel coronavirus."