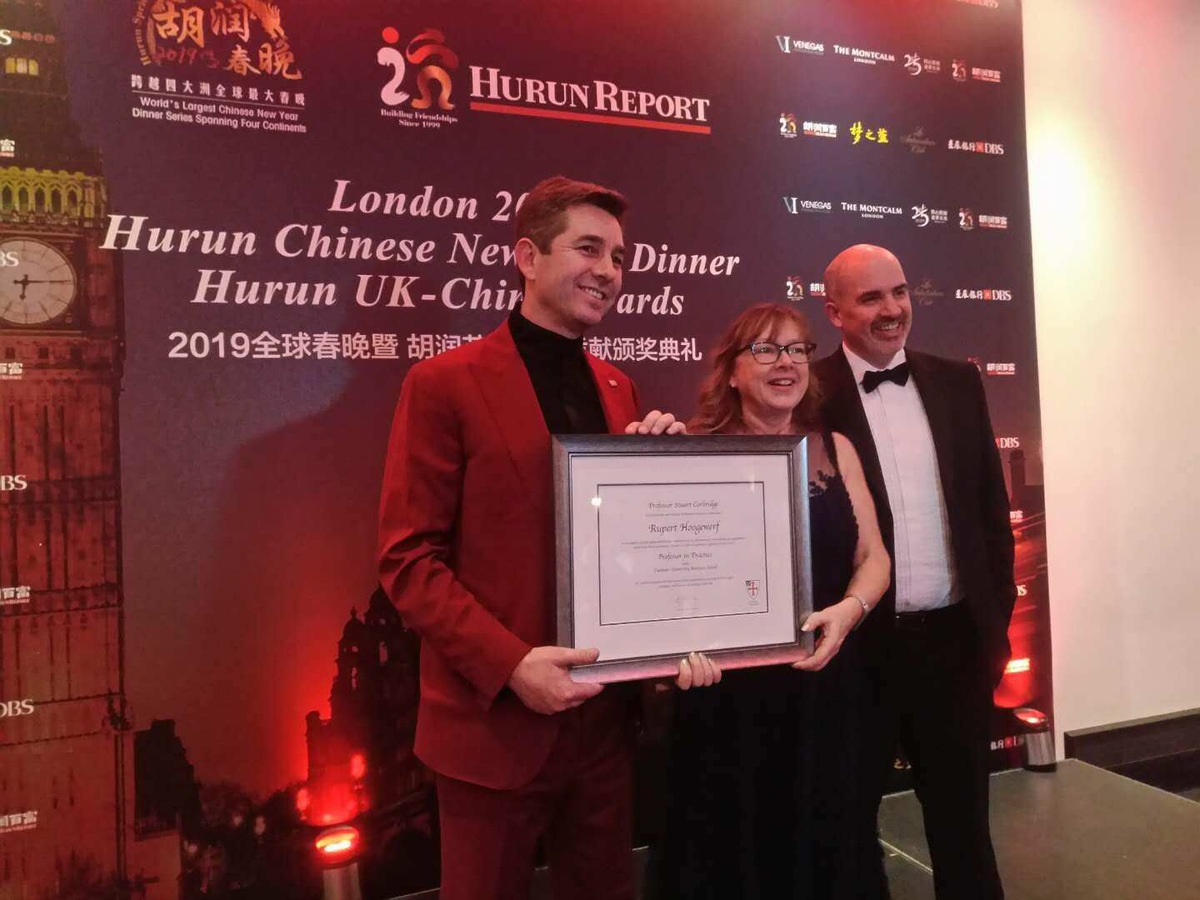 The Hurun Report, viewed as the voice of the Chinese entrepreneur, is best known for its "China Rich List" which has been published since 1999, and which ranks the wealthiest individuals in China.

It is equivalent to China’s Forbes magazine and its founder Rupert Hoogewerf, whose Chinese name is Hu Run, is regarded as the "Godfather" of the "China Rich List" and has established Hurun as the leading authority on tracking the rapid rise of China’s business leaders.

Recognizing outstanding contributions to the UK-China relationships, Hurun UK-China Awards 2019 was held in The Montcalm London Marble Arch on January 28, 2019, with over 300 distinguished guests attending and 20 awards were presented.

Hoogewerf, the publisher of the Hurun Report, said the significance of the awards is to "recognize" those made outstanding contribution to the China-UK relationship. "There are a lot of people whose work is unrecognized. It is not the award with money, it is just an award with recognition," Hoogewerf said, adding it is both for the Chinese entrepreneurs who come to the UK and their UK counterparts who go to China.

The Awards celebrate the success of organisations that have made significant contributions to building bridges between China and the UK.

Amongst the recipients were Aston Martin, iconic luxury British sports car manufacturer, recognized for its outstanding contribution to UK-China relations for services to Luxury British car-making, Kensington Wade School, the first prep school in the UK to offer English and Chinese education to pupils aged 3 to 11, for services to education, and VisitScotland, Scotland’s tourism promotion agency for services to Travel.

"Scotland has seen a huge growth in visitors from China over the last ten years. With increased air routes, including the new direct route from Beijing to Edinburgh launched last year, numbers are only expected to rise further, and we will continue to work with our partners to improve the visitor experience for Chinese travelers," Bruns added.

Hurun Chinese New Year Dinner Series aims to honor the outstanding figures and organizations that make significant contributions to the relations between the destination and China in fields of investments, trade, culture, education, and sports.

Dubbed as the world's largest Chinese New Year dinner series, which will cross 4 continents and extend to 8 cities, it kicked off in Shanghai on January 16, Toronto on Jan 20, New York on Jan 23, Los Angeles on Jan 25, London on Jan 28, Istanbul on Jan 29, Luxembourg Jan 31 and ending up in Sydney on Feb 17.