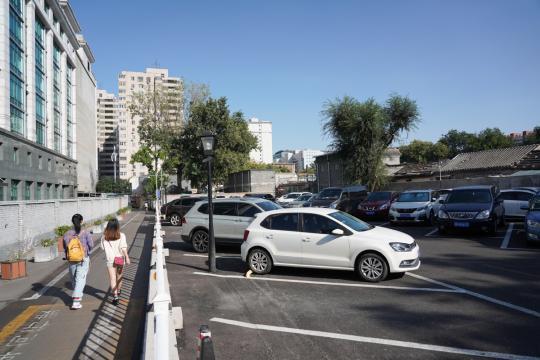 People walk past a parking lot in Dongsi Jiutiao hutong in Dongcheng district of Beijing on Sept 20, 2020. (Photo: Xinhua)

Li Jing, a 33-year-old white collar worker who lives with her parents in Xizongbu Hutong in Beijing's Dongcheng district, is happy that she doesn't need to worry about parking any longer.

"There used to be so many cars parked in this narrow hutong," she said."I worried that there would be no parking space left for me when I got back after work. I also worried about my parents being hit by cars in this crowded space."

After recent upgrades by the local authority in this alley, or hutong in Chinese, Li said she now parks her car in a designated parking lot near a museum not far from her home.

"The community management office has talked with the museum, which has reserved space for about 140 parking spots for residents in Xizongbu Hutong, as well as some residents nearby," Li said.

In this 800-meter hutong, there are 44 courtyards with 800 families, a hospital and a primary school. The parking issue had been a headache for people living there.

Three years ago, the local authority started a project to improve the environment. Up to 122 utility poles were removed and all the wires put underground. After the project was completed, the authority banned parking in the hutong, making it the first "zero parking" hutong in the Jianguomen area.

Wang Xiuli, a 65-year-old retired woman who lives in the hutong, said after the parking problem was solved, the hutong started to become prettier.

"The government has built three small parks that we call 'pocket gardens' in the hutong," she said. "We have a place to rest and enjoy the greenery nearby, which is pleasant."

So far, Dongcheng district has 39 hutong that have banned parking and have cooperated with nearby companies, institutions and public facilities to provide space for residents to park.

According to the district, it has a shortage of 56,000 parking spots in the area. To improve people's lives and create better traffic conditions, the government has added 4,800 shared parking spots and built 22 parking facilities with an overall parking capacity of 3,300.

In addition, the district government has established 6,086 parking spots along the city roads and 4,600 spots inside certain hutong.

It was not an easy task to negotiate.

In Dongsi Batiao, which is now also a "zero parking" hutong, residents formed a "self-rule parking regulation" that established standards for people's parking rights there.

The government talked with the land owner of a spare area at the end of the hutong and turned it into a public parking lot. Residents who meet the standards can park their cars in the lot.

Beijing has been making great efforts to become a cozy place for people to live.

In the newly-released core area development plan for streets and blocks in Beijing from 2018 to 2035, the central government has stated that the city should protect its culture and history, while maintaining convenience for the people.

"We believe that we will have an even more beautiful and greener life in Beijing in the future," said Wang, the Xizongbu Hutong resident.