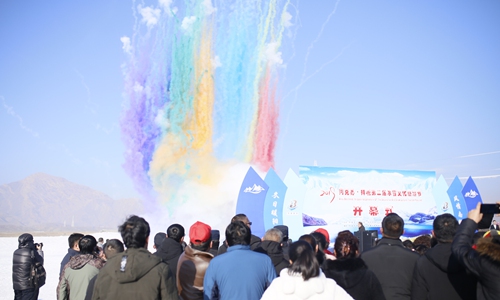 The opening ceremony of the Second Ice and Snow Culture Tourism Festival of Baicheng, Aksu on December 10. (Photo: Global Times)

Skiing venues have been built. Many tourists enjoy snow entertainments they had never tried before. The venues also contribute to poverty relief by providing working opportunities to nearby residents.

The festival echoes Xinjiang's strategy to boost winter tourism. It aims to develop ice and snow tourism resources in southern Xinjiang at the same pace as northern Xinjiang and to attract more tourists, according to a statement the Aksu publicity department sent to the Global Times.

The Quanyu Xingkong International Skiing Venue was opened in Wushi county, Aksu prefecture in Xinjiang on Friday. Located on a hill in Alasayi village, the venue covers an area of 580,000 square meters.

Currently, more than 30 million yuan ($4.31 million) have been invested in the first stage project of the skiing venue, which includes six standard trails, a snow playground and a snow motor experience. It even imported three penguins from Beijing.

A total of 150 million yuan will be invested. Five skiing trails, a spring resort and funiculars are all being planned in the future.

Even though snow in southern Xinjiang is not as abundant as in the north, the venue has used snowmakers to fill the site.

The ski venue in Wushi is currently the biggest ski venue in southern Xinjiang. It could provide 150 working opportunities to Wushi residents.

The skiing venue welcomes visitors to enjoy snow activities such as skiing, sledding, snowmobiling, as well as dancing and singing.

A total of 12.9 million yuan was invested in the Baicheng hot springs skiing venue, Hu Chao, general manager of the Silu Qingyuan tourism development company, which made the investment, told the Global Times.

Professional skiing tracks are expected to be built in 2020 with a further investment of 50 million yuan, Hu said.

Tourism has helped local residents shake off poverty, Keranmu Mehmet, secretary of the Communist Party of China committee at Tiereke village, one kilometer from the skiing venue, told the Global Times in early December.

Now 19 Tiereke villagers are employed at the skiing venue, bringing each of them a monthly salary of between 2,400 and 4,000 yuan, he said.

Twenty-four-year-old Mareyamuguli Eziz works in the ticket office of the venue. She told the Global Times that previously she stayed at home to take care of her two children. Now she is very happy to earn 3,000 yuan a month and know more people.

The four regions are aided by provincial regions of the Yangtze River Delta, including Shanghai, Anhui, Jiangsu and Zhejiang.

Tours featuring self-driving caravans and special trains will be promoted in northern Xinjiang to develop the winter tourism market.