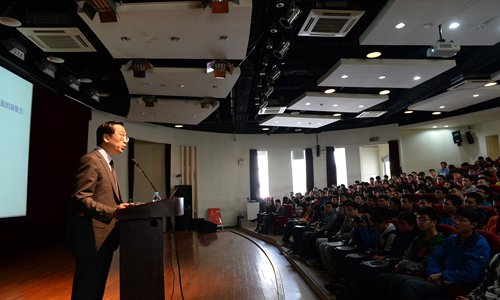 A teacher delivers a lecture at an ideological and political course at Shanghai Jiaotong University. Photo: IC

"What score would you give to the country's opening up and reform policy?" This is a question that appears on the projector screen in an ideological and political course at Tsinghua University in Beijing. Under the question is the "bullet screen" - rolling comments left by students via their cellphones that include "6666" (equivalent of "bravo" in Chinese), "I would give 100%," and "Residents in Shenzhen say that the opening and reform policy has brought a lot of benefits."Unlike traditional ideological and political theory courses, in which teachers explain complicated theories in sometimes highly convoluted ways, China has witnessed the emergence of an increasing number of new-style courses in the past year just like the one at Tsinghua University. Taught by associate professor Feng Wuzhong from the university's School of Marxism, the course has attracted a large number of students. During the class, students can scan the QR code to log in to the online class and express their opinions freely. Feng makes comments on their opinions and awards the more active students with digital cash. Meanwhile, Feng's course, Introduction to Mao Zedong Thought, has been made available to the public on Cambridge-based edX, an international massive open online courses (MOOC) platform created by MIT and Harvard in 2012, and has attracted thousands of sign-ups from countries including the US, UK, France and Spain. Ideological and political theory courses in Chinese universities have long faced the problem of "paying more attention to theoretical research while ignoring class teaching." Commenting on Feng's course, Education Minister Chen Baosheng said that students are not willing to listen to "dead theories" and such courses successfully bring in more students to use their smartphones to gain new knowledge. Spreading trendFeng's course is not an isolated case. Major changes have also been made to ideological and political theory courses in other higher education institutes across the country. According to a survey conducted by the Ministry of Education in 2,516 universities, 83.2 percent of 3,000 courses have been evaluated as "excellent" and "good". Over 86 percent of 30,000 students said that they like to attend the ideological and political theory courses, with 91.3 percent of them asserting that they have gained a lot from them.  In Shanghai, several top universities have launched a campaign to reform ideological and political theory courses. According to the Xinhua News Agency, the teacher of the Basic Principles of Marxism course in Shanghai Normal University attracted students by combining philosophical problems with theoretical knowledge. For example, the teacher asks students questions such as "What kind of values do China's animated films reflect?" and "How can we combine the China Spirit in future animation creations?" Furthermore, the ideological and political theory course "Situation and Policy" in East China University of Science and Technology is no longer a class taught by one teacher, but a whole team. Students are not only required to attend the class and submit papers, but need to prepare before the class and review it afterwards. According to Xinhua, Fudan University also opened five new ideological and political theory courses including "Human and Medicinal Science," "Politics and Society" and "Environment and Human Beings." By inviting experts from medical schools, international relations academies and physical institutes, the courses received overwhelming acclaim from the students. Many college students reached by the Global Times said that they are now attracted to their school's ideological and political courses as they now serve as a platform to learn more about China's history and future direction, especially on some contentious issues, from a diversified perspective. Leading subjectSuch changes came after Chinese President Xi Jinping pledged to integrate ideological work in colleges into the entire education process at a two-day meeting on ideological and political work in China's universities and colleges in December 2016.  As higher education shoulders the major responsibility of cultivating successors for the socialist cause, it must adhere to correct political orientation, Xi said.He noted that the work must focus on students; caring for them, serving them, and helping them improve in ideological quality, political awareness, moral characteristics and humanistic quality to enable them to develop both ability and integrity.In September 2017, the discipline of Marxism in six universities, including Peking University, Tsinghua University and Xinjiang University, was listed as a "world leading subject at top universities." "My deepest feeling about the changes in our school's ideological and political course is that course teachers are focusing more on all the students' opinions," a student surnamed Zhuang from Tsinghua University told the Global Times. "The teachers would hold reading seminars to discuss the country's future development and political systems with us. More importantly, they usually explain them with actual examples in a vivid and objective way, especially ongoing hot social issues," said Zhuang.