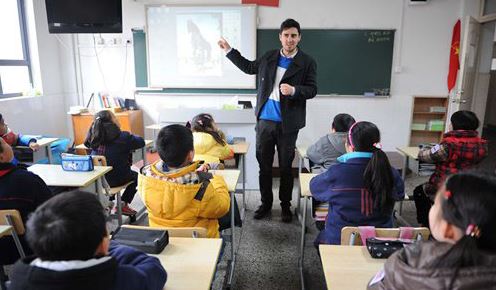 A foreign teacher gives a lesson to pupils in a local primary school in Shanghai. (Photo: CFP)

Four suspects were prosecuted in Southwest China's Chongqing Municipality for helping foreigners illegally come to China and fabricating work permits which allow them teach in schools.An education consulting company called Bokelai is suspected of illegally recruiting foreign people as English teachers to teach in kindergartens, primary and secondary schools in Chongqing and Chengdu, capital of Southwest China's Sichuan Province, the Xinhua News Agency reported.The 18 foreign teachers involved were all from non-native English-speaking countries including South Africa, Brazil, Mexico and France. Most of them only had high school or junior high school education, and some of them were also foreign students who did not have any work experience.South African Mageer, a 26-year-old, who is one of the foreign teachers, said that the interviewer from Bokelai did not care about his junior high school degree.Major cities such as Beijing require foreign people to have bachelor degrees or above and a minimum of two years' work experience to obtain work permits, the Beijing government said in 2014."The foreign teachers in Tianjin Foreign Studies University (TFSU) at least need the foreign expert certificate and working visa in China," a teacher in TFSU surnamed Song told the Global Times on Wednesday.Many institutes hire foreigners for show for Chinese parents, and English skill of some so-called foreign experts are worse even than some Chinese, John, from the UK, who works as an English teacher in a private institution told the Global Times on Wednesday."The fact is, the more Caucasian you look, the higher salary you will get because most parents prefer Caucasians over other races," said Cassey Chen, an employee at a Beijing English teaching center, told the Global Times. Zeng Yuanyuan, one of the company's shareholders, is responsible for finding kindergartens in need of foreigner teachers that agree to conduct job interviews online. She said those foreign teachers would then apply for a tourist visa after she helps them find employment with cooperating kindergartens. These people would later become English teachers at the kindergartens after only a week of training. "The company signs a labor dispatch contract with the kindergarten and pays the teachers 15,000 yuan ($2,242) to 20,000 yuan per month," said Jiang Yu, an employee from Bokelai. Wang Yushi, an official from the State Administration of Foreign Expert Affairs, told media that there were 400,000 foreigners working in China's education industry in 2017, but only one third of them are qualified.Statistics show that Chinese children are learning English at a younger age than before. Nearly 70 percent of the 2,003 respondents reported that their own children or children they know started learning English before the age of 5."The myth about foreign teachers reflects some parents' superficial understanding about English learning. These 'teachers' who haven't received proper training can only provide simple conversation skills, not systematic language education," said Xiong Binqi, vice president of 21st Century Education Research Institute.