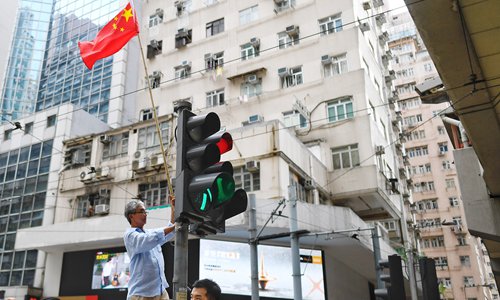 A Hong Kong resident puts up a Chinese national flag at a traffic intersection in Sham Shui Po area on Ausust 11, 2019. (Photo: AFP)

More and more Hongkongers urged police to strictly enforce  the law and bring all violent rioters to justice after the city suffered another weekend of chaos and public transport disruption.

Around 4 pm, protesters stopped near Cheung Sha Wan police station. They started to destroy steel road barriers and cut off CCTV cameras. Then they began to provoke the police by barking and shouting insulting words at them.

The police shot three rounds of tear gas after previous warnings, forcing them back. Some hid in nearby residential areas, and people living in the compounds who planned to go out had to go home because of the smoke. Then at a distance of 200 meters, the police and protesters confronted each other for about 20 minutes.

Regardless of police warnings, the protesters refused to leave, prompting the police to fire more tear gas and disperse them in 15 minutes.

They went to Tsim Sha Tsui to stage another demonstration and protest against the police.

One day earlier, groups of black-clad protesters marched toward Nam Wan Road in Tai Po, which was not permitted by the police.

The area around Tai Po subway station was like a ghost town as all the stores, even some 24-hour convenience shops and pharmacies, were closed ahead of the illegal assembly.

The Global Times reporters saw few local residents walking in the area. Some streets were blocked by barricades with railings and road signs set by protesters.

When protesters reached the march's end point near Tai Po police station, they used umbrellas as shields to protect those who broke up road fencing to build barricades. Police issued a tear gas warning at the standoff. The protesters left, without escalating the tension.

"They are changing strategies now," said a source close to the protesters, who preferred not to be named for personal safety reasons.

Protesters - many of them teenagers - could not always come up with a consensus about what to do next, or where to go, noted the source, who has been following them for weeks.

They made reckless decisions by the hand game of rock-paper-scissors, the source told the Global Times.

"This is just a live game for them, and their ultimate goal is to disrupt society and lead the city into chaos," he said.

Later, protesters blocked a transport junction at Tai Wai station with barricades, digging out stones and bricks along the roads.

"We are prepared to attack the police amid a standoff," a protester dressed in black and wearing a mask, who preferred not to be named, told the Global Times.

They set fire in some places such as Tsim Sha Tsui police station and near Suffolk Road in Kowloon Tong.

"I have to walk all the way from my home to the subway station in Tai Po," a resident living near Tai Po Plaza, told the Global Times on Sunday.

"It was super hot yesterday, no bus on the street, which was very inconvenient."

"We have to emphasize that protesters' behavior is not only illegal but also disregarding public order and the needs of other members of the public," a government spokesperson said Saturday. "Violent behaviors such as arson are even more dangerous," said the spokesperson.

Flash mobs took less than two hours from blocking roads to dispersal, Tung Kin Lei Kelly, a member of the Sha Tin District Council for the constituency of Tai Wai, told the Global Times on Sunday.

When protesters occupied populated areas, many business owners were "scared and rushed to leave, but could not speak out against protesters as they feared retaliation," Tung Kin Lei Kelly said.

The illegal flash mobs "spread panic" among residents, she said, noting that police had to disperse and arrest those who blocked roads, damaged or set fire to public property.

As some rioters illegally occupied roads near Nathan Road shopping area, dozens of police officers came to disperse them.

The sudden skirmishes affected tourists and passers-by who took pictures and videos of the standoff between police and protesters.

The Global Times reporters saw some protesters, who changed their black shirts and pretended to be passers-by, shouting out insulting words and slogans at police officers.

They believed that police would not fire tear gas toward bare-handed civilians, said the source.

The protesters changed strategies "from violent attacks to more deceptive, confusing acts," Tang Fei, a member of the Chinese Association of Hong Kong and Macao Studies, told the Global Times on Sunday.

The Hong Kong police is "capable of finding explosives" amid the latest riots, Tang said.

"They are equally capable of finding the 'black hands' behind them, as financial status and equipment play a decisive role in escalating tensions."

Hundreds of residents showed up with warm greetings and beverages, chocolate, cakes, flowers and thank-you notes for officers at police stations across the city during "Day of Supporting Police" on Saturday.

Some newspapers published an open thank-you letter to the police, appreciating their professionalism and sacrifice amid recent events and hoping police would continue to strictly enforce the law.

The statement reiterated that anyone participating in an unauthorized assembly commits an offense and police would strictly enforce the law against all violent and illegal acts.