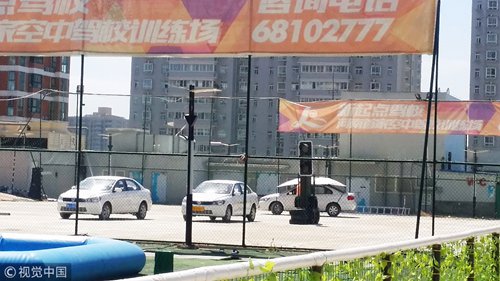 A driving training school is opened on the top of a 4-floor building in Zhengzhou, Central China's Henan Province in September 2016. (Photo: VCG)

For months an unlicensed driving school in Wuhan has evaded the eyes of local authorities. Among the possible reasons, one stands out: It's on the roof of a seven-story building.

Occupying about a 300-square-meter area, the rooftop school, which was not named in reports, conducts classes daily despite a recent law forbidding driving schools from operating within the city limits.

One local resident has raised safety concerns. "There are only some billboards functioning as fences," said Tang, who can see the school clearly from his apartment window. "It sits 20 meters from the ground."

The manager of the school, surnamed Wang, said this is not an issue.

"Besides, there's no need to worry about safety - it used to be a rooftop parking lot before we rented the place," Wang said.

However, the driving school shares the roof with a dance school for children.

"I often have to warn my child not to go running around up there," said a mother surnamed Li.

"How was the driving school approved, anyway?" Li asked.

The building's property managers were evasive when approached about the school. "We have nothing to do with the driving school," an employee told the reporter.

Since 2014, all driving schools were mandated to relocate to Wuhan's suburbs and occupy an area of no less than 10,000 square meters.

However, Wang implied the law is not thoroughly enforced. "We are not the only driving school breaking the rules," Wang said.

The school has since been reported to local authorities, Changjiang Daily reported.