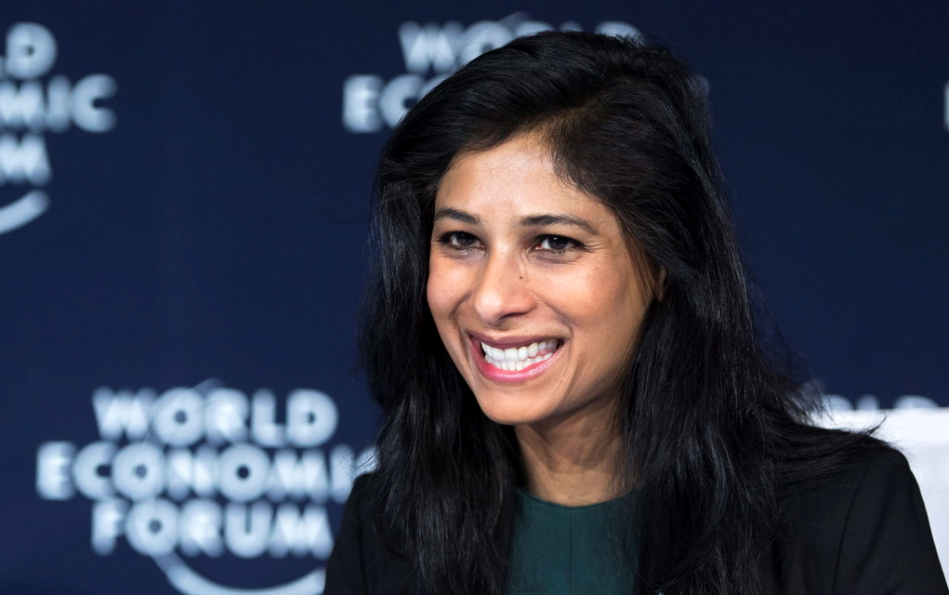 Gita Gopinath, chief economist for the International Monetary Fund, speaks during a media briefing during the 49th annual meeting of the World Economic Forum in Davos, Switzerland, on Jan 24, 2019. (Photo:IC)

WASHINGTON, July 17 (Xinhua) -- China's current account surplus in 2018 narrowed further, as its external position was assessed to be in line with fundamentals and desirable policies, reflecting progress in rebalancing, the International Monetary Fund said Wednesday.

China's current account surplus continued its decline in 2018, reaching 0.4 percent of GDP in 2018, according to the IMF's newly released annual External Sector Report.

This mainly reflects a shrinking trade balance, driven by high import volume growth, and a continued increase in the services deficit, mostly driven by tourism, as well as higher prices of certain products.

In recent years, China's economy has become increasingly reliant on domestic demand rather than exports. According to the latest data from the National Bureau of Statistics, retail sales of consumer goods rose 8.4 percent year on year in the first half of 2019, with online sales surging 17.8 percent.

From a longer perspective, China's current account surplus has declined "substantially" relative to the peak of about 10 percent of GDP in 2007, reflecting strong investment growth, real effective exchange rate appreciation, weak demand in major advanced economies, technological upgrades in manufacturing, and a widening of the services deficit, the IMF report said.

In an overall assessment, China's external position in 2018 was broadly in line with the level consistent with medium-term fundamentals and desirable policies, which represents a change from earlier assessments of "moderately stronger."

China's average REER rate in 2018 appreciated by about 1.4 percent relative to 2017, driven by the appreciation in the nominal effective exchange rate, the report said, adding that external balance assessment indicated that China's REER to be at the same level as warranted by fundamentals and desirable policies.

On China's economy, Gopinath said it's important for China to continue its pivot toward more domestic demand driven growth, to ensure that there is less reliance on credit and to encourage the growth of the private sector.

The report showed that current account surpluses in 2018 remained centered in the euro area, driven by Germany and the Netherlands, and in other advanced economies such as Singapore and South Korea, while deficits remained persistent in Britain, the United States and some emerging market economies, such as Argentina and Indonesia.

Following the global financial crisis, overall current account surpluses and deficits fell sharply from about 6 percent of global GDP in 2007 to about 3.5 percent in 2013. Since then, global current account imbalances have declined slightly to 3 percent of world GDP in 2018, the report said.

Risks from the current configuration of external imbalances are "generally contained," at least in the near term as current account deficits and debtor positions are largely concentrated in advanced economies that issue reserve currencies, Gopinath said.

Trade tensions, she said, have so far not significantly affected global current account imbalances, but are weighing on global investment and growth, urging all countries to work cooperatively on the issue.

Highlighting the impact of trade tensions, she said that higher tariffs have been associated with increased prices for consumers and have been eroding business confidence and disrupting global supply chains.

Gopinath said the IMF also found that the effects of exchange rates on trade flows are "relatively muted" in the short term, especially in economies where trade is largely invoiced in the dollar.

The economist noted both deficit and surplus countries should focus on tackling the underlying macro and structural sources of imbalances instead of resorting to distorted trade actions, calling for "carefully tailored and sequenced structural policies."

"Countries should work jointly toward reviving liberalization efforts and strengthening the rule-based multilateral trade system that has served the global economy well over the past 75 years," said Gopinath.