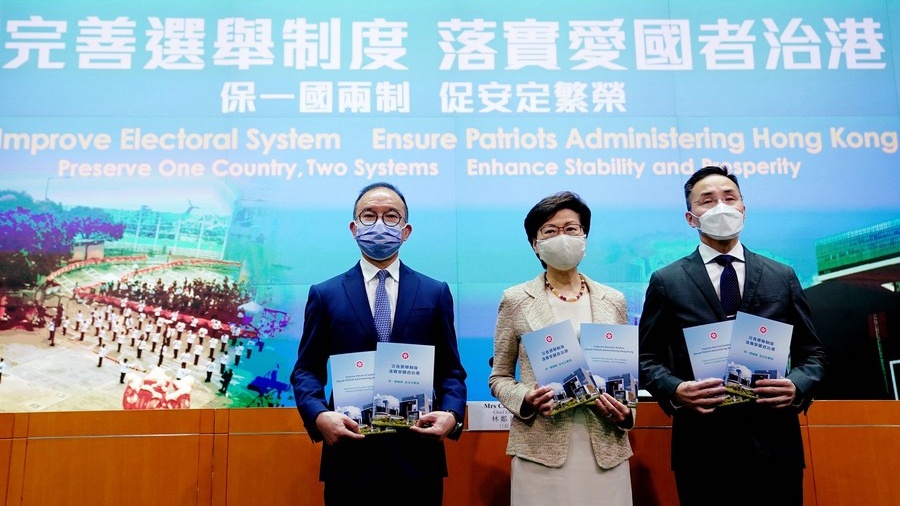 Carrie Lam, chief executive of the Hong Kong Special Administrative Region (HKSAR), said on Wednesda)y that the implementation of the National People's Congress' decision to improve the HKSAR's electoral system will be a top priority for the region's government in 2021.

Lam made the remarks during an awards ceremony held for "The selection of the ten major policies of the HKSAR government in year 2020," in which "the Law of the People's Republic of China on Safeguarding National Security in the HKSAR safeguards social stability" was ranked first.

She said that after the promulgation and implementation of the national security law in Hong Kong, street violence that had plagued Hong Kong residents for many months has almost disappeared, calm has been restored to the society, and residents' rights and freedom have been safeguarded.

Lam said that in 2021 the HKSAR government will fully cooperate with the central authorities in implementing the amended Annexes I and II to the HKSAR Basic Law through local legislation. Over the next 12 months, elections for the Election Committee, the Legislative Council and the Chief Executive will be held "successfully," she said.

"Free COVID-19 vaccination for the public in Hong Kong next year" was ranked second on the list of the 10 policies. Lam said that vaccination remains the best hope for Hong Kong to overcome the pandemic, and she urged the public to get vaccinated as soon as possible.

The awards ceremony was launched in 1998.