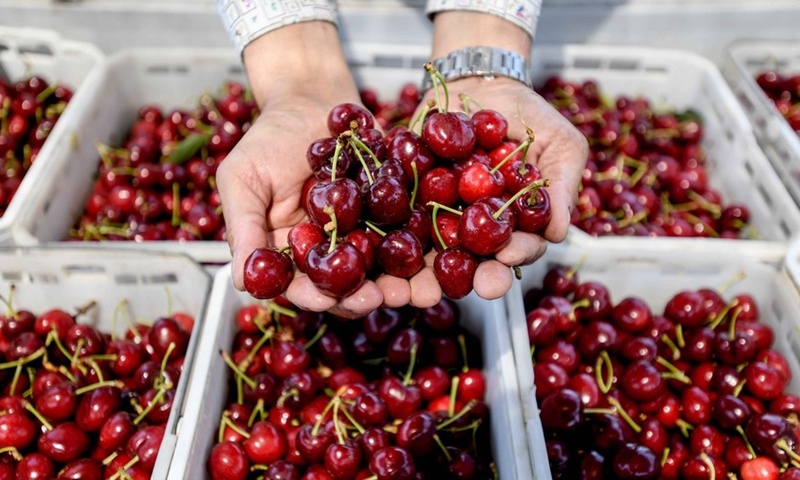 Imported cherry prices have plunged to as low as 10 yuan ($1.5) per kilogram in Shanghai after samples of imported cherries found to be COVID-19 positive have triggered consumer concern.

A trader in Shanghai Huizhan Wholesale Market, a hub for China's fresh fruit import trade is reported to sell the imported cherries for as low as 10 yuan per kilogram, a historical low.

"The panic selling is a rare case and is more of a marketing strategy used by vendors to attract customers and boost sales," a person in charge of Huizhan Wholesale Market surnamed Wang told the Global Times on Monday.

Some traders approached by the Global Times confirmed that price of 10 yuan per kilogram is incredibly low, as the price has been keep declining as vendors are racing against time to sell before the cherries got rotten.

A fruit retailer surnamed Dong told the Global Times the price has dropped on a daily basis which has triggered a chain reaction.

"The price dropped because cherries would not sell at such a low price and triggered retailers to sell at even a lower price before it sinks again," Dong said. "In previous years we have to queue at wholesale markets to get the fruit and nowadays few people take imported cherries in the wholesale market. It is predicted that the price will continue to drop."

Because of the slower sales, some fruit has gone rotten that explains why some retailers are selling them at extremely low prices, but most vendors store the cherries in the cold storage which can last half a month, he added.

To assure the consumers of the safety, Shanghai Huizhan Wholesale Market is stepping up efforts for the inspection of imported cherries, demanding the Customs declaration certificate, quarantine certificate, disinfection certificate as well as nucleic acid test certificate before they are allowed to enter the market, said Wang.

"On the wholesale side the price has stabled after medical experts stated that there is no need to panic as long as the cherries are thoroughly washed before being consumed. More imported cherries are arriving in China, and we hope everything can become normal soon," he said.