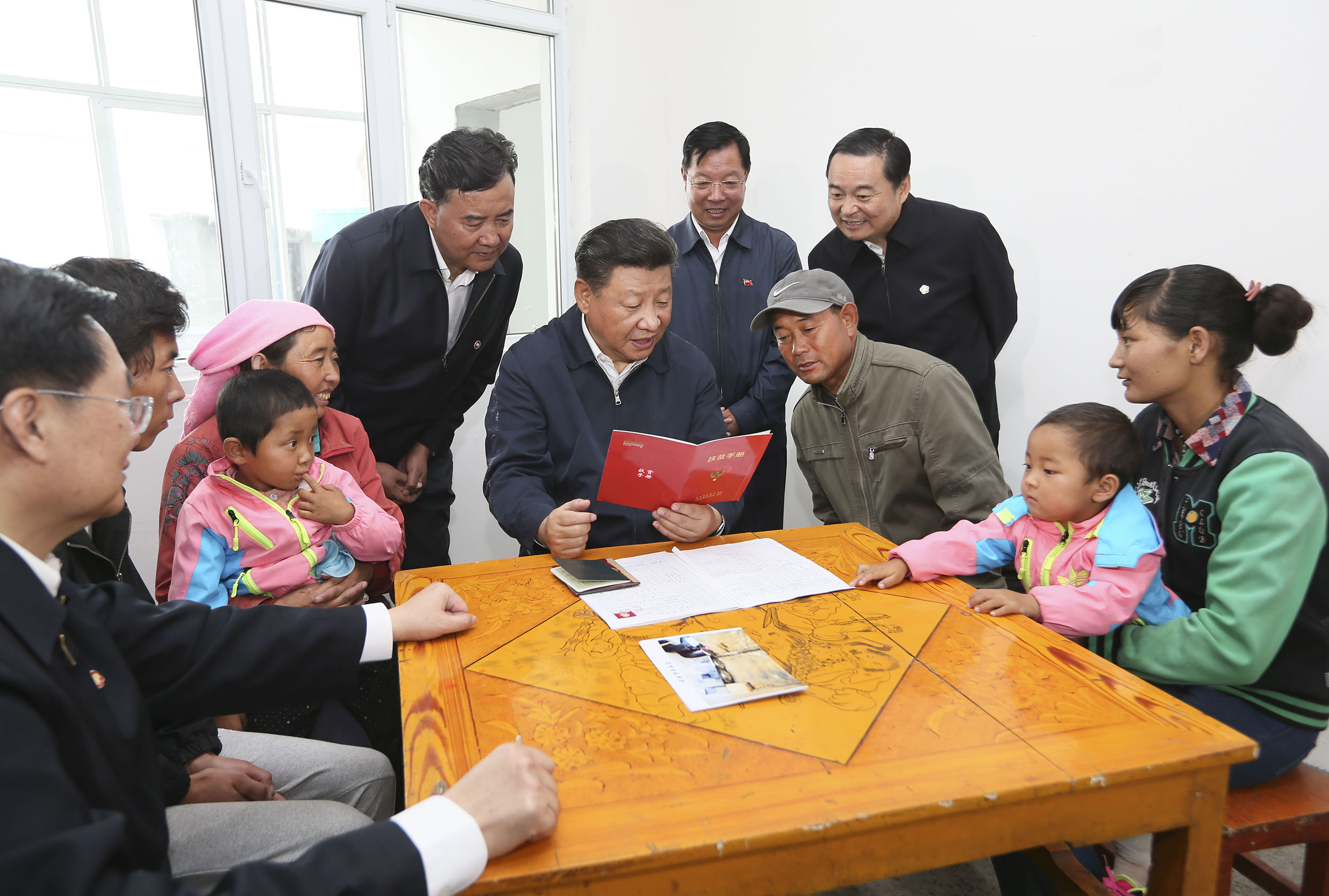 Villegers in 129 households no longer have to wrestle so much with traffic, water, education, medical and marriage problems.

In 2016, the Qinghai provincial government registered the 5th and 6th communes of Banyan Village as a poverty alleviation relocation project.

“President Xi was walking on the mud as the road remained to be hardened,” says Su. 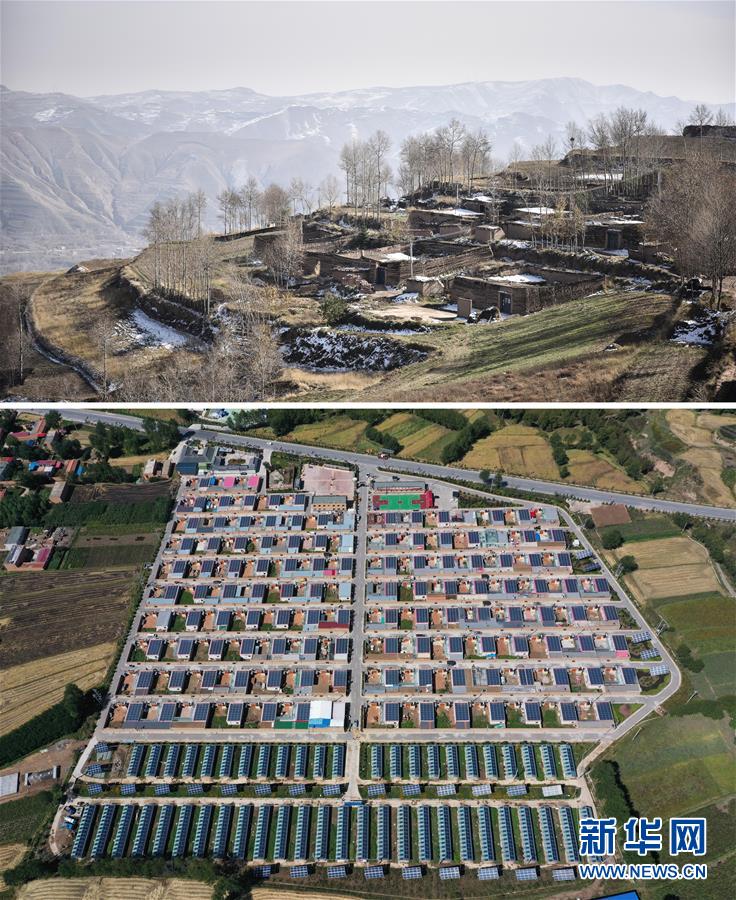 “Ensure new homes of quality and quantity for villagers”

“When the President arrived, the main part of the relocation project was basically completed with the accelerated construction of infrastructure,” says Su. “He was very concerned about the quality of the houses, infrastructure and people’s life after the relocation.”

When Su first arrived at Banyan Village in October 2015, both the 5th and 6th communes were still located on the 2, 700-meter high mountain areas. For these villagers, tap water was a dream.

“When President Xi came, I showed him the tap water and he was glad that we now have convenient water, electricity and communication and hoped we enjoy a better life,” says villager Lyu Youzhang. 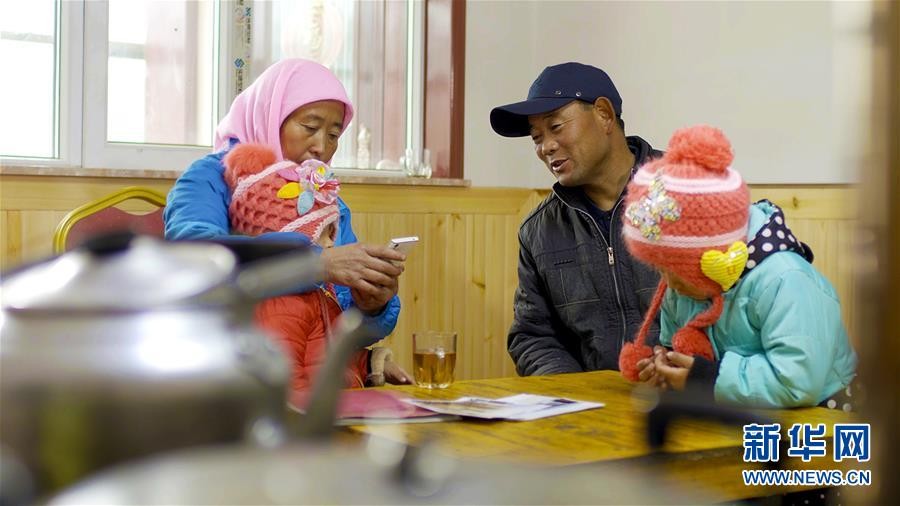 In the new Banyan village, villager Lyu Youjin and his wife look after their granddaughters. (Photo: Xinhua)

“We must implement well the poverty alleviation relocation project and ensure people a home of quality and quantity,” President Xi said.

“listen to what the villagers want”

When Su first arrived at Banyan Village, people were living in adobe houses without electricity or decent furniture. Some were dilapidated.

Villagers lived on barren lands without enough water to drink, not to mention irrigation.

Su visited 20-30 households a day with his team, registered all 732 people and persuaded them house-by-house to relocate. Some villagers were worried about loss of income and their old houses.

“President Xi pointed out the effectiveness of relocation for poverty alleviation during his inspection tour here. He also stressed the importance of listening to what the villagers want and letting them participate in planning their new villages,” Su says.

“So we elected representative villagers to oversee the project quality and let villagers decide the type of houses they prefer.”

President Xi also stressed that all measures of poverty alleviation should be implemented in time to boost production when villagers settled.

Su organized technical training for villagers and helped each family develop planting and farming under a specific policy.

A 57-year-old villager, Lyu Zhiwei, shook off poverty one year after moving downhill.

“I have subsidies of 1,200 yuan ($172) for every mu (Chinese land unit equivalent to 0.06 hectare) of farmland reconverted into forests, 5,400 yuan by raising pigs in the unified rearing zone in the village and 2,500-yuan bonus every year for photovoltaic power generation,” Lyu says.

Lyu says he also got grain subsidies for 1.2 hectares of transferred land.

Su set up a donkey-breeding cooperative with his team to boost the rural collective economy.

“We can sell the meat to restaurants and hide to Shandong for making donkey-hide gelatin,” Su says.

The Coiled Embroidery Garden next to the village council is a traditional yard with characteristics of the Tu ethnic group.

Coiled embroidery, a national intangible cultural heritage, is also a source of additional income for villagers. 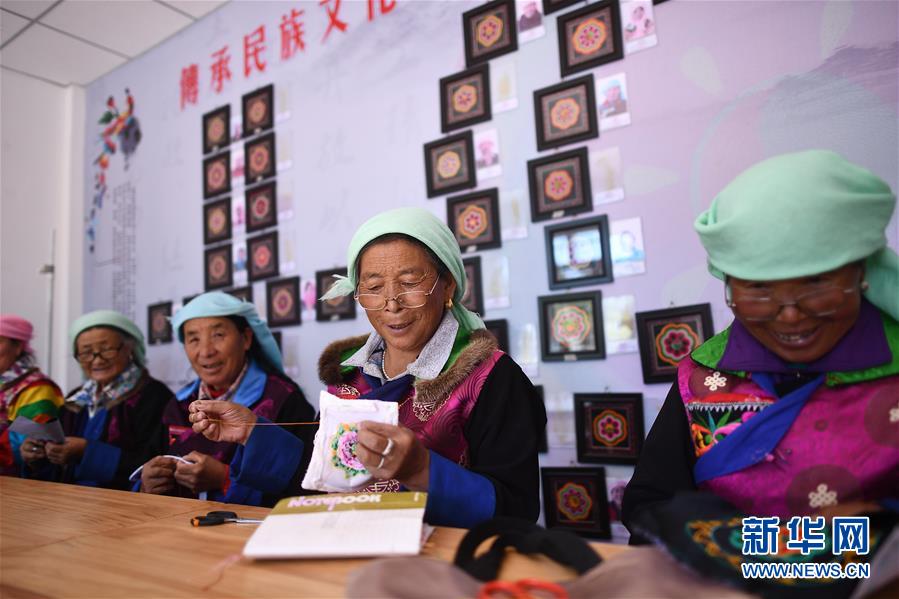 "President Xi stressed that the building of new villages should be integrated with measures to promote production and employment, improve basic public services and protect ethnic, regional and cultural features and styles," says Li Chengying, secretary of the CPC branch of Banyan Village.

“We spent 3 million yuan of national special funds for targeted poverty alleviation on the establishment of the Coiled Embroidery Garden, where women earn an average yearly income of 6,000 yuan per capita, some up to 17,000 yuan,” says Yuan Guangping, the current first Party secretary in charge of poverty alleviation in Banyan.

The youngest son of Lyu Yourong has planted potatoes in 11 hectares of transferred land and bred more than 100 sheep and 60 cattle halfway up the mountain with a 400,000-yuan loan. He also operated a rural tourism business in the summer.

“President Xi encourages us grassroots level officials to stand together with villagers and roll up our sleeves to work harder, so we must persist in striving forward to live up to his trust,” says Yuan.