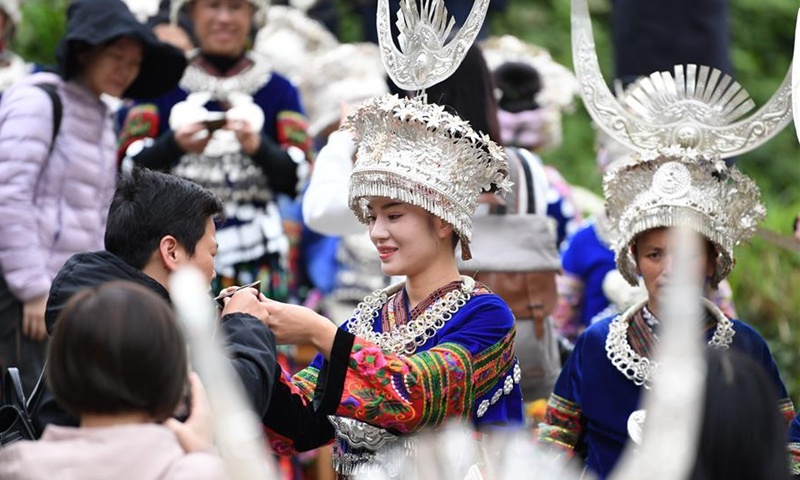 An impoverished county in Southwest China's Guizhou Province has come under criticism for building an 88-meter-high statue of the Miao goddess Yang Asha that cost 86 million yuan ($13 million). Netizens slammed it as a waste of funds that should be used for poverty alleviation.

The statue was constructed in November 2016 and completed in July 2017. Media reports said that Jianhe county was previously a national-level poverty-stricken county, and only got rid of poverty on March 3.

A staff member at Jianhe County said that the government is fully committed to poverty alleviation, and has spent all funds allocated for poverty alleviation work in the past three years. Some auxiliary facilities originally planned to be constructed for the statue have been suspended, Red Star News reported Wednesday.

Yang Asha is a legendary character in Jianhe. Since 2007, the Yang Asha Cultural Festival has been held in the county every year in order to bring publicity and promote cultural tourism.

In order to develop the tourism sector, the local government invested heavily in the construction of Yang Asha hot springs park and county scenic spots, including the Yang Asha theme park, where the statue is located.

The statue was verified to be the world's largest of the Miao goddess Yang Asha by the World Record Certification Agency on December 16, 2017.

China's Ministry of Housing and Urban-Rural Development (MOHURD) has strengthened the management of urban sculptures. In September, the ministry released a notice of criticism of the giant Guan Gong statue in Jingzhou, Central China's Hubei Province, and the Shuisi Tower project in Dushan county, Guizhou Province.

The notice pointed out that the giant Guan Gong statue damaged the style and historical context of the ancient city. It also said that the Shuisi Tower is a "cultural landmark" that was built indiscriminately and divorced from reality, and that it damaged the natural landscape.