CHINA In Shanghai, people told to stand still on escalators

In Shanghai, people told to stand still on escalators 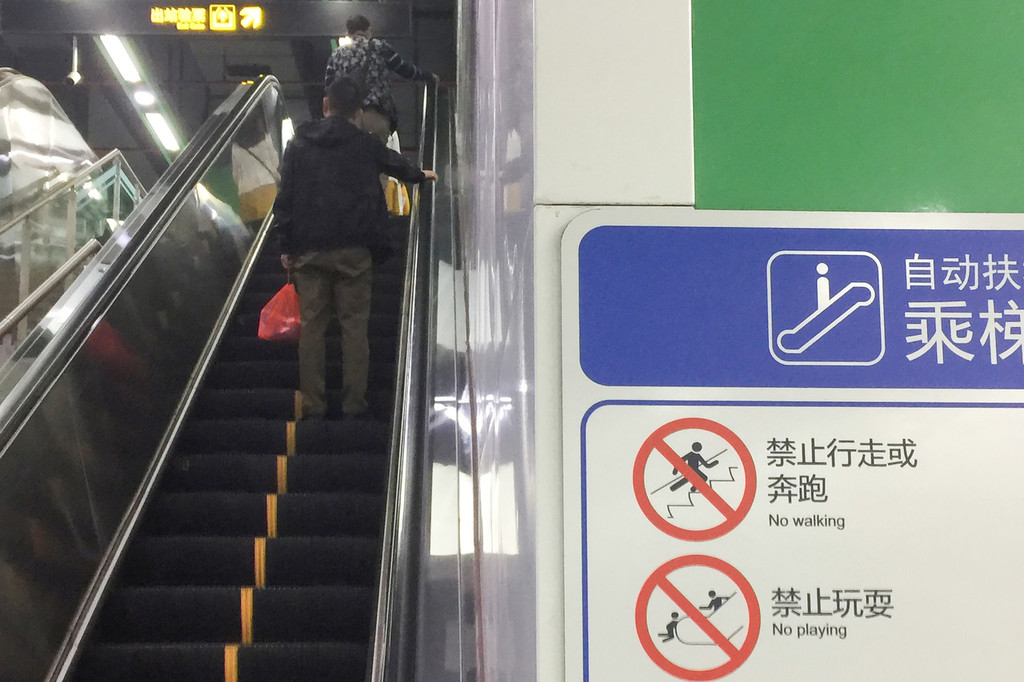 Save your look of judgment for anyone blocking your path as you try to walk past them on an escalator in Shanghai. The new safety notices posted in every metro station in the city tell you to stand still.

The notice also warns people against playing, leaning and facing the wrong way, as well as carrying heavy goods or trolleys on escalators.

While standing on the right and walking on the left has been the norm, the city has changed this etiquette to "no walking" for the safety of commuters and the proper functioning of escalators.

Experts also warned that walking on escalators in itself is always dangerous.

The height of an escalator step - around 21 centimeters - is higher than that of a standard stair, which is around 16 cm. Passengers may miss a step.

Lesley Strawderman, a professor at Mississippi State University, said in an article last month in Quartz, a news organization in the United States, that restricting people to one side of an escalator limits the amount of space available to commuters and just slows everyone down.

Shanghai, which in 2013 began promoting the etiquette of standing on the right and walking on the left, is not the first city to abandon the norm. Many cities in China, including Tianjin, Xi'an and Nanjing have dropped the practice.

"It used to be a courtesy not to block people walking on the escalator, but given the safety concerns and damage to the machines, holding the handrails and standing still should be advocated," lawyer Liu Linsheng was quoted as saying in the local news portal Eastday.

The new notices, although not compulsory, have won support from commuters.

"It's been a habit for most to leave space on the left for those who walk on escalators, so we may not be able to change our habits overnight," said Peng Xuan, a commuter in Shanghai. "But for the safety of everyone, if you want to walk or are in a hurry, you can use the stairs."

Peng said he has seen some people fall while trying to move too quickly on an escalator, adding that during peak hours standing on both sides is more efficient.