CHINA In Xinjiang, carpets retain their magic as industry grows

In Xinjiang, carpets retain their magic as industry grows 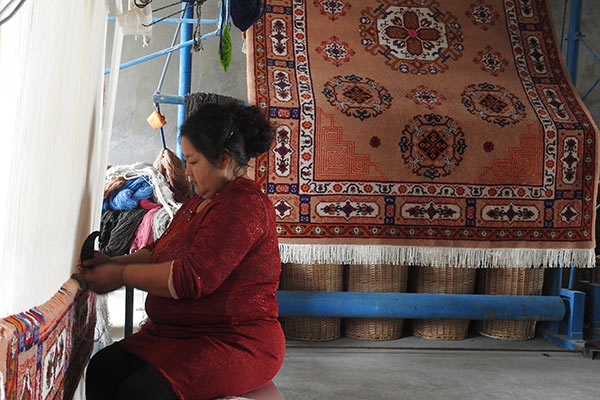 A woman weaves a carpet by hand at a local workshop in the Xinjiang Uygur autonomous region in May. [Photo by Li Lei/China Daily]

A carpet factory in Northwest China is helping boost trade between the Xinjiang Uygur autonomous region and Central Asia, as well as to preserve traditional Uygur culture.

"Carpets are a must for every Uygur household, regardless of economic status," said Karim Mamattinez, director of the Xinjiang Parlak Carpet Factory in Urumqi. "Some people drape all their walls at home in exquisite carpets. It is a symbol of wealth and good fortune."

He said Xinjiang was once a big importer of Turkish and Iranian carpets, as local manufacturers mainly produced handwoven carpets－less than 300,000 square meters a year locally. But that can no longer meet the increasing demand in the region, he said.

He said the change was due to government support for ethnic industries, such as the carpet factory, as well as embroidery and traditional musical instrument workshops

In 2014, the central government called for developing Xinjiang's ethnic industries to boost the local economy and employment.

Mamattinez said that when his factory was established in 2009 in Urumqi it benefited from policies giving ethnic businesses favorable tax rates and government subsidies.

In 2015, Parlak set up a workshop to train people to weave carpet by hand to meet the demand of high-end consumers and preserve the technique. When they had finished their training, they were sent to one of the seven Parlak outlets across Xinjiang, including in Kashgar, Hotan and Aksu.

Though the Parlak factory was among the first in the region to make carpets using machines. Mamattinez noted that handwoven carpets also have their value.

"They can be more exquisite because people can add as many colors as they want, whereas machines are limited to 16 colors," he said.

Parlak also acquired more than 13 hectares of land from the local government last year to establish a carpet industrial park, which will include a research and development center, a trading zone and a customer service center.

Mamattinez said the park is still under construction and is expected to be put into use by 2019. It will increase Parlak's output 10 times and create 1,200 jobs, he said.