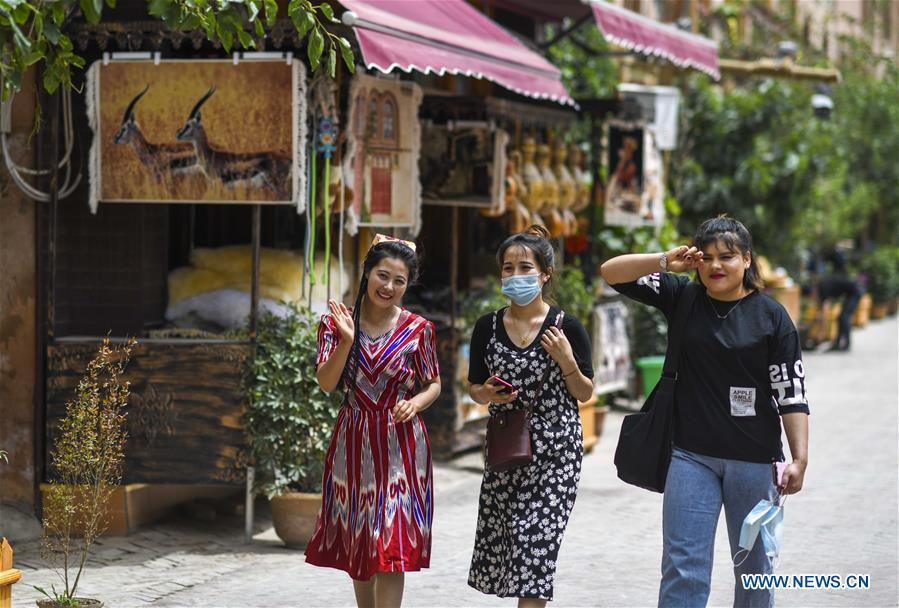 Local residents walk in a street at a scenic spot in the ancient city of Kashgar, Northwest China's Xinjiang Uygur autonomous region, May 16, 2020. (Photo: Xinhua)

Some residents of the Xinjiang Uygur autonomous region denounced accusations of "forced labor" as they shared personal stories at a news conference on Thursday telling how they have benefited from the region's flourishing tourism, including finding jobs in the sector.

The residents, including employees at campsites and other venues and entrepreneurs who have taken advantage of the surging tourism across the region to start their own businesses, gave detailed accounts of how they chose their job on their own and work hard in pursuit of happiness.

Mewlan Turaq owns a boutique selling cultural and creative products in the Ancient City of Kashgar, a rammed-earth building complex in southern Xinjiang's Kashgar prefecture that was designated a national 5A tourism attraction in 2015.

He designs and displays more than a dozen pieces of Uygur clothing in his shop and makes other products, including vintage accessories, bags and mobile phone cases decorated with Uygur patterns.

When Mewlan was studying at Jiangxi University of Traditional Chinese Medicine in Jiangxi province, he became fascinated with designing clothes that combine traditional Uygur styles with modern fashions.

"I had been paying attention to the tourism development of Kashgar prefecture, my hometown, and I was glad to see that the government has forged the Ancient City of Kashgar into a renowned scenic spot," he said.

In 2018, he decided to go home to the scenic area and open a boutique selling various products of his own design. Customers can also pick and rent the clothes and accessories they like from Mewlan's shop for photos.

"I turned a hobby into a business, and no one has ever forced me to do anything," he said, asking some foreign forces with ulterior motives to stop fabricating rumors about forced labor and other false notions about Xinjiang.