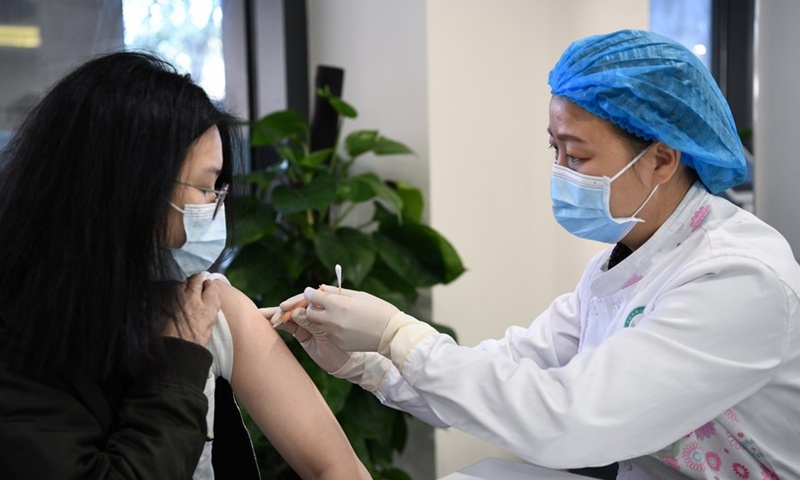 A woman receives an injection of the COVID-19 vaccine at a healthcare center in Shenzhen, south China's Guangdong Province, Dec. 30, 2020. (Photo: Xinhua)

After the latest coronavirus outbreaks, including one in North China's Hebei Province, prompted the public to discuss whether vaccines can tackle the problem, experts explained although the approved inactivated vaccines cannot cure the infected, they are suitable for China to protect the general public.

Hebei, free from the virus for months, reported more than 120 infections as of Wednesday. However, given the nature of the inactivated vaccines that have been granted conditional approval, there is little to be gained in using them on confirmed patients or silent carriers, Yang Zhanqiu, a deputy director of the pathogen biology department at Wuhan University, told the Global Times.

An inactivated vaccine works by using killed viral particles to expose the body's immune system to the virus without risking a serious response. "Inactivated vaccines function like 'building a Great Wall' to keep the virus out," Yang said. "This can only prevent infection for healthy people, but it cannot help patients who are already infected, or who are in the incubation period."

However, for those around the patient who are not yet infected, a vaccination should be given urgently as a preventive measure, such as to people in Hebei who have not been infected yet, Yang said.

Yang pointed out that another technology route — the new mRNA vaccines — can help infected people battle the virus, or function "inside the Great Wall." These vaccines carry part of the coronavirus' genetic code into the human body, triggering the body to form viral proteins sufficient to train the immune system to attack the virus, which means that they might ease patients' condition and reduce damage to the organs.

China is also developing mRNA vaccines and Fosun is cooperating with Pfizer and BioNTech on the route. Fosun launched a phase II clinical trial in November and it showed the vaccine was "90 percent effective." In December, Fosun said that at least 100 million doses will be provided in China in 2021 when the vaccine is approved.

Meanwhile, China has not approved any mRNA vaccines, which is a new route in developing vaccines.

Internationally, both inactivated and mRNA vaccines can be used to increase the efficiency of inoculation programs to protect people, analysts said.

Even in countries hard hit by the coronavirus like the US, the infection rate has not reached the level of herd immunity, so inactivated vaccines are a very useful way to boost herd immunity among uninfected people, Yang noted.

Sinopharm, the Chinese manufacturer of inactivated vaccines, said that it would be able to produce 1 billion doses in 2021 and it has signed contracts with countries, such as Brazil, the UAE, Turkey and Bahrain.