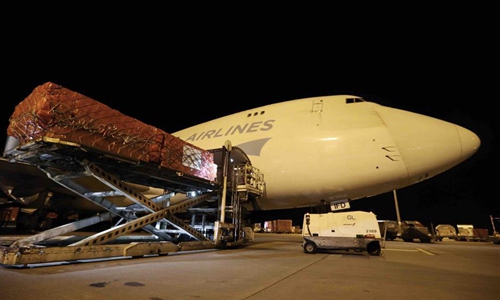 Chinese medical supplies on COVID-19 for Europe are unloaded at the airport of Liege in Belgium, on March 13, 2020. (Photo: Xinhua)

As the coronavirus outbreak rages across the world, China is churning out medical supplies and testing kits to support the overseas battles against the virus.

However, testing kits providers in China reported that some foreign countries' inadequate understanding of different testing methods, some misplaced order consultations, and logistical obstacles are the biggest difficulties in exporting testing kits.

"We understand the antibody tests take less time and have a lower requirement for medical diagnosis tools, which Europe is badly in need, but inadequate understanding and misoperation of the testing kits will do no good to the screening process," a staff member of Shanghai BioGerm Medical Biotechnology Co told the Global Times, on condition of anonymity.

She took an example of Colloidal Gold, a diagnostic test for the coronavirus, which usually requires only 15 minutes, saying some Chinese companies clearly state that the method is only used as a complementary testing method for the nucleic acid test, hence, is not an effective screening tool by itself.

She noted misoperation of the testing kits also results in problems with the virus detection abroad, adding that domestic testing by non-medics should be strictly restricted.

Chinese Embassy in the Czech Republic on Friday cited Czech official as saying some staff did not follow the instructions strictly when undertaking the tests.

The department vowed on the same day to crack down on illegal manufacturers of the testing kits.

Responding to the claims of "substandard" Chinese testing kits, allegedly being used in Spain, the Chinese Embassy in Spain noted a company named Shenzhen Bioeasy Biotechnology in South China's Guangdong Province, did not get the license from the Chinese authorities to sell its products. Local market supervision administration in Shenzhen, Guangdong, has launched an investigation into the company.

Bioeasy explained that the low sensitivity of the testing kits used in Spain is due to inaccurate handling of the diagnosis tool as they did not follow the instructions when extracting samples.

According to industry insiders, as long as the products have CE labeling, they could be sold in the EU. The CE labeling is a certification stamp that indicates conformity with health, safety, and environmental protection standards for products sold within the European Economic Area.

Compared with CE certification, the US FDA takes a longer time to approve testing kits applications, even though the US is struggling to provide enough testing kits to its own people.

According to a health official at the US Centers for Disease Control and Prevention (CDC), many of the commercial tests remain in short supply.

Anne Schuchat, the CDC's principal deputy director, said in an interview, "The global supply for many things is limited, and for the reagents, for the different molecular tests, the diagnostic tests, that's a challenge."

So far, only one Chinese testing kits provider, BGI Genomics, has acquired Emergency Use Authorization from FDA, on Friday, allowing the company to enter the US clinical market.

The global daily consumption of nucleic acid testing kits is between 500,000 to 700,000, stated a report by Huaxi Securities, noting now at least 26 countries are importing test kits from China with the total orders hitting 15 million.

However, according to the insider at Shanghai BioGerm, the daily capacity of China's nucleic acid testing kits providers is only about 3 million.

"Now, too many order consultations come from abroad, especially from Italy and the US. They all requested a large consignment of testing kits between 5 to 10 million, which every Chinese factory could not provide by themselves," the insider said, calling on a channel to distribute and manage the disordered overseas demand.

"We don't know what would be the exact demand from foreign countries and they do not know about China's manufacturing capacity," she told the Global Times.

Foremost, transportation of the testing kits becomes one of the biggest difficulties as many of the airlines reduced operations. Financial media 21jingji.com said even though some countries opened a green channel for medical supplies, but their working efficiency is pretty low.

The report said some testing kits require cold-chain transportation, but to Italy which only allows the service of DHL, the company cannot provide dry ice. Some logistic companies had to raise transportation fee because of the intense air resources.

Some airlines had to transform their aircraft from passenger cabin into medical cargo supplier. For example, China Eastern Airlines spent 48 hours to disassemble 316 seats in an airline and transported a batch of medical supplies to Prague on Tuesday.