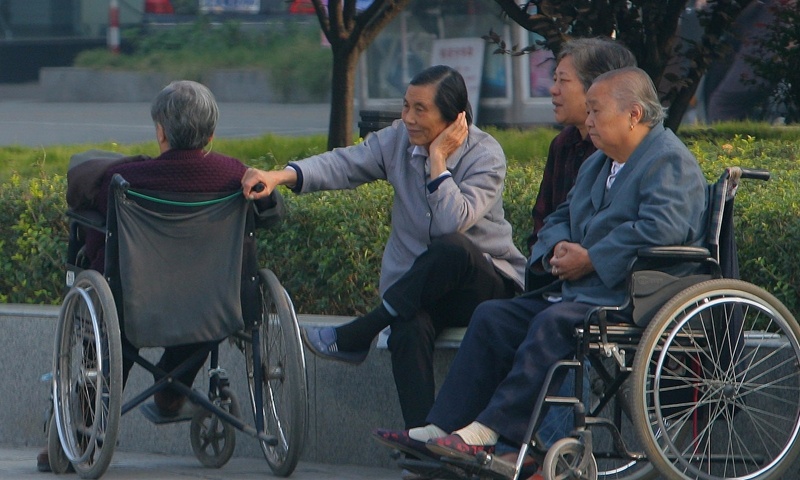 In China, which has a long tradition of home-based elderly care, visitors may be surprised to see five homes for senior citizens along a 500-meter stretch of Baisha Road in Changsha, Hunan Province.

Hu works for Zhaoxi Qingshanci Community Care Center, one of the five nursing homes. "Baisha Road is in the old town area of the city of Changsha, and a lot of elderly people live here," she said.

According to data released on the official website of National Bureau of Statistics, the number of people over the age of 65 reached 175.9 million in 2019, accounting for 12.56% of the country's overall population of 1.4 billion.

It's estimated the number of elderly will continue to grow. "During the 14th Five Year Plan [2021 - 2025], it is predicted that China's elderly population [over the age of 60] will exceed 300 million," Jia Weizhou, spokesperson of the Ministry of Civil Affairs, said at a regular press conference on Oct 23.

"We will see a surge in demand for elder-care as parents of the first generation of children born under the one-child family planning policy reach an advanced age in the next five to 10 years. The elderly care industry is facing big challenges," said Jia.

Chen Zhiping, chief of elder care under the Civil Affairs Bureau in Changsha's Tianxin district, told the Global Times that "there are 12 private and 2 public nursing homes in Tianxin district."

Lin Lezheng, a 93-year-old man living at Zhaoxi Qingshanci Community Care Center, worked as an architect before retiring from China Metallurgical Group Corporation 33 years ago.  He now shares a 20-square-meter room with another resident.

"The nursing home seems to be an ideal place to live for old people. It feels like living in your own home. If there is any discomfort the staff will take care of you," said Lin. His son and daughter-in-law haven't been able to return to China because of the COVID-19 epidemic since September. "I am relying on the nursing home to take care of me."

With increasing demand for elder care, the lack of professional staff has become more acute.

Peng Bowen, who is only 23 years old, is already the person in charge of the Zhaoxi Qingshanci Community Care Center on Baisha Road, which has 50 beds with 38 residents.

"Workers in the elderly care industry are generally younger, but many leave after working for one or two years in nursing homes, as salaries are too low to support their own families," Peng said.

Peng graduated just three years ago from Changsha Social Work College, majoring in elderly service and management. The college was the first in the country to offer a major in elder-care services in 1999.

"Most of my colleagues chose to work in elderly care centers as we want to bring some changes to this sector. Our salaries are very low, and our public image is not as high as a teacher's," said Peng.

Peng said he and his team, who are mostly young people of his age, have done a lot to improve the living condition, diet, and medical treatment of residents in his senior's home, but residents under their care still have complaints.

"They (the center) should invite experts on nutrition and food for the elderly, because sometimes the food is not suitable for us," said Lin.

The Chinese government has been putting greater emphasis on supervision of nursing homes and introducing measures to improve elderly care services. New measures on the management of nursing homes took effect on November 1, according to the official website of the Ministry of Civil Affairs.

"The most urgent problem is that we need to set norms for those who establish nursing homes. Most nursing homes in Tianxin district don't have a fire safety license because of unclear ownership of the rented building," Chen said.

Although the government provides subsidies for the construction and operation companies establishing nursing houses, profits are still low, Chen said.

"The elderly care industry is more like a livelihood industry, solving social and employment problems, and the government basically does not collect taxes from elderly nursing homes," Chen said.

"It was only when I came to work in the nursing home that I realized what care for elderly really means," Lin lamented. "It's a great benefit for the elderly to continue to interact with society, integrate into society and receive positive education. I really hope there can be greater focus on the elder-care industry," he said.