Last year, 10 million people returned to the countryside to start businesses, a rise of 19 percent from 2019 and the biggest increase in recent years, according to the Ministry of Agriculture and Rural Affairs. 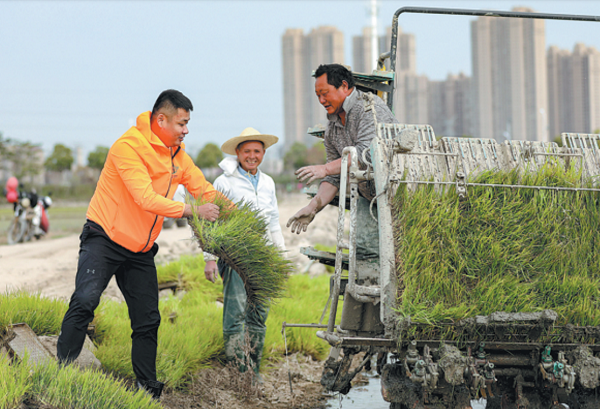 Hong Liangbin (left) helps with seedlings at a rice cultivation base in Jinjiang, Fujian province, in April. (Photo: China Daily)

Online stores, livestreaming sales and contact-free delivery have provided new opportunities for rural entrepreneurs, said Liu Huanxin, the vice-minister. He added that migrant workers, college graduates, military veterans and women were among the major groups returning to the rural areas.

More than 19 million returnees have become employed in or near their hometowns, Liu said during a video conference in March.

Moreover, as of June last year, China had built 6,959 maker-spaces, 4,849 incubators for tech businesses and 620,000 enterprises to attract talent to push innovation in the countryside and promote rural jobs, according to a ministry report on the development of digital villages.

"Starting an agricultural business requires heavy investment, but it has a slow payback. Many people have reservations about the prospects, which causes difficulties in employing people," he added.

Hong's experience in rural entrepreneurship inspired him to build the makerspace to support newcomers. He used to work in the information technology sector and later founded a company developing crop protection drones.

When he started seeking opportunities in agriculture in 2016, his relatives and friends said it was not a "decent career transition" and were pessimistic about his future.

After Hong succeeded in using drones to protect 20,000 hectares of rice fields in Fujian, he decided to establish a platform to help fund young people's startups and assist them in learning more about agricultural innovation.

"This new generation of farmers is better at mental work rather than physical labor, which is changing traditional farming styles by integrating resources and cooperation," he added.

According to Li Youjia, head of the Jinjiang agriculture department, by the end of last year, the city was home to 477 modern farmers who are well-versed in technology and management.

Hong said: "Talent is the most important element in rural vitalization. Smart, young entrepreneurs returning to rural areas can encourage and guide the older generation to embrace modern agriculture."

He hoped more financial support would be given to incubators like Jiujiu, though so far he hasn't encountered any funding problems as the startups he invested in have already started making profits.

Liu, the vice-minister, said his department will promote rural industries and cultivate a number of enterprises to encourage villagers to start businesses or get jobs.

Innovation parks will be built in the countryside to provide greater opportunities for rural entrepreneurship and job vacancies. More preferential policies and subsidies will be given to entrepreneurs who are starting their first business or have been in operation for more than six months, he added.