CHINA Independence not a solution for Hong Kong: UK Ambassador to China

Independence not a solution for Hong Kong: UK Ambassador to China 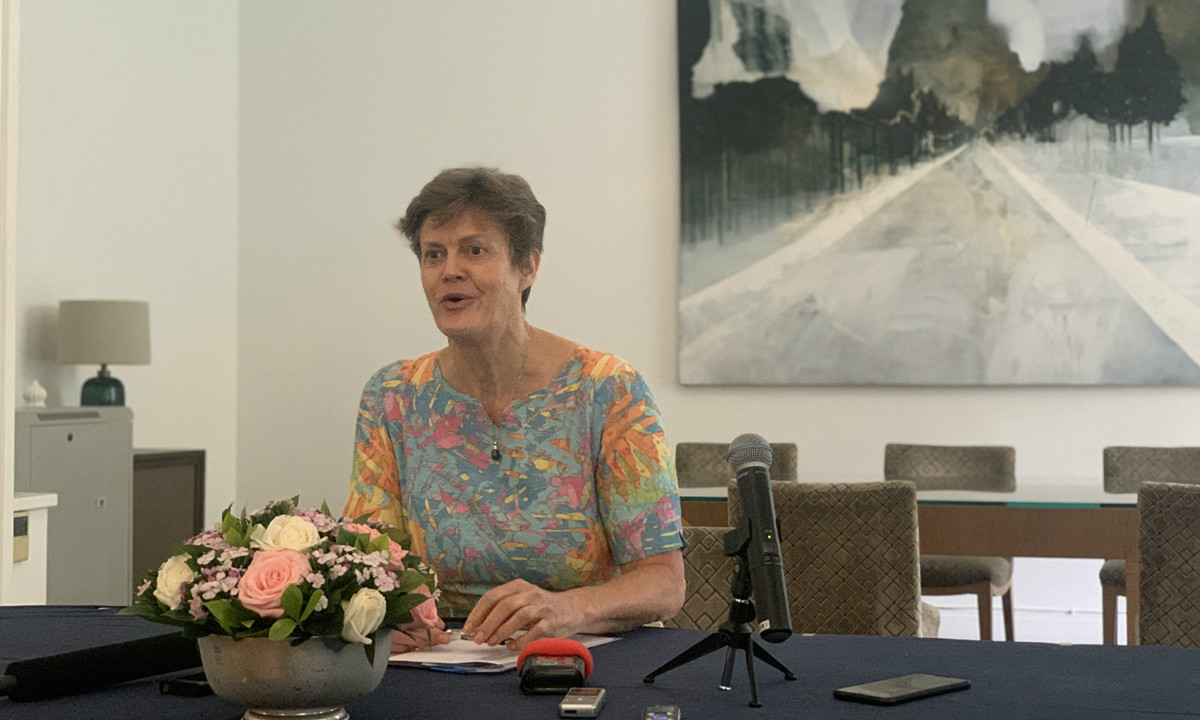 As UK-China ties face growing challenges due to disputes on a number of topics including Hong Kong, Xinjiang and Huawei, British Ambassador to China Barbara Woodward emphasized consensus, not differences, between the two countries. The envoy, who is about to finish her term as ambassador and depart Beijing, hopes to keep communication channels open, and she said that independence is not a solution for Hong Kong.

However, when asked about how to respond to the UK's moves in challenging the Chinese government on the Hong Kong matter — including hosting fleeing secessionists such as Nathan Law Kwun-Chung and Sunny Cheung — Woodward did not directly address it. With Britain hosting more Hong Kong secessionists, Chinese Ambassador to the UK Liu Xiaoming recently warned that harboring a so-called "parliament in exile" in the UK would pose new and severe obstacles to bilateral ties.

Trust and understanding are very important in building a strong bilateral relationship, Woodward emphasized in a press conference on Wednesday, while avoiding further elaborating on whether the UK would become a safe haven for Hong Kong secessionists who are wanted by local law enforcement authorities.

This was the last press conference that Woodward gave in Beijing. She will soon finish her term as British Ambassador to China by the end of August.

While seeing more divergences that have been leading to deteriorating bilateral relations between the UK and China, the ambassador clarified that it's important to emphasize the areas that the UK and China agree on.

Meanwhile, the British government condemns violence in any form, which has been done publicly, and we both want prosperity and stability in Hong Kong, Woodward told the Global Times.

The bilateral relationship has been worsening lately as the Chinese side takes moves by Britain on this issue as "blatant interference" in its internal affairs.

These moves include the suspension of an extradition treaty with Hong Kong as opposition to the recently enacted national security law for Hong Kong, and an extension of the arms embargo from that applied to the Chinese mainland to Hong Kong, while constantly claiming that the Sino-British Joint Declaration is under threat.

Britain's foreign minister Dominic Raab recently expressed grave concerns over the postponement of the Hong Kong Legislative Council elections and the disqualification of some candidates, after he announced a new visa for Hong Kong's British National Overseas passport holders. These moves constituted a number of wrong remarks and deeds of the UK side that hurt UK-China relations.

Our concern is that the national security law [for Hong Kong] has undermined [Hong Kong's] high degree of autonomy, Woodward argued.

Those areas where the two sides agree, in her opinion, are the basis for us to have continued discussions about the areas where we disagree, she noted.

China's position on the Joint Declaration is consistent and clear,  Liu told the Global Times in a recent interview. The UK has no sovereignty, jurisdiction or right of "supervision" over Hong Kong after its handover, Liu said. Therefore, the UK side should not use the Sino-British Joint Declaration as an excuse to make irresponsible remarks on Hong Kong and interfere in China's internal affairs.

The tensions between the two countries were inflamed further following the UK's decision to ban Huawei from its 5G network. After the UK announced its decision, it was criticized for dancing to the tune of the Americans on foreign policy. However, the British ambassador argued that the UK remains an open market and very welcoming to Chinese investment.