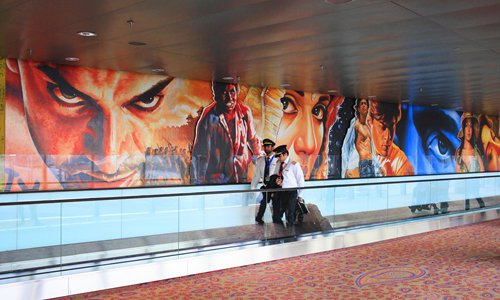 An art installation at the international airport in Mumbai, India .(Photo: IC)

China's waning appetite for US movies due to the US-China trade friction could offer an opportunity for the Indian film industry to tap into the fastest-growing film market in the world, experts forecast on Tuesday.

US industry insiders noted that film quotas would be an easy target for China in response to tariffs imposed by the administration of US President Donald Trump, the report said.

After China and the US reached an agreement in a WTO dispute concerning US film exports in 2012, China increased the quota for foreign films from 20 titles per year to 34, domestic news site people.com.cn reported. However, the agreement was then set to be reviewed after five years, with more rounds of negotiations to come over further opening-up of China's movie market.

Trump was always likely to become a major hurdle in China-US film cooperation, said an article on the WeChat account named yiyuguancha in February 2017.

"Hollywood movies are part of the services trade, and the impact of the current trade tension will go beyond goods to other areas," Bai Ming, a research fellow at the Chinese Academy of International Trade and Economic Cooperation, told the Global Times.

"This is a competition between two major economies, and I believe countermeasures in the services trade should be taken into consideration in the future," he said.

While US filmmakers see China as a vital market, the Indian movie industry has also been striving to build interest among domestic audiences. "Given the US-China trade friction and Chinese audience's aesthetic fatigue toward American films, the Indian film industry will have greater opportunities," said Tian Guangqiang, assistant research fellow with the National Institute of International Strategy at the Chinese Academy of Social Sciences.

"If China introduces US films, I may go and watch these movies if they are really good. But if this is affected by the trade friction, I will not voluntarily watch US movies," a regular moviegoer named Ma Shi in Beijing told the Global Times on Tuesday.

"Indian films should take advantage of the US-China trade tension to appeal to Chinese audiences and cash in," Tian said.

From 2016 to 2018, India exported eight movies to China while the US exported 156, including those co-produced with other countries, according to data sent to the Global Times on Tuesday by entertainment industry information provider EntGroup Inc.

However, the trade dispute between China and the US has not affected the film industry yet, Tian noted.

"Given China's huge market potential and the box office success of previous Indian films, the Indian movie industry will pay more attention to the Chinese market, and will expand its presence through a variety of ways like co-productions," he said.

In the past three years, Indian films have made a total of 2.79 billion yuan in China, according to EntGroup data.

But it will be difficult for the Indian film industry to become dominant in China, as there are still cultural differences between the two countries, Tian said. "More cooperation between Chinese and Indian movie stars could also be beneficial," he said.