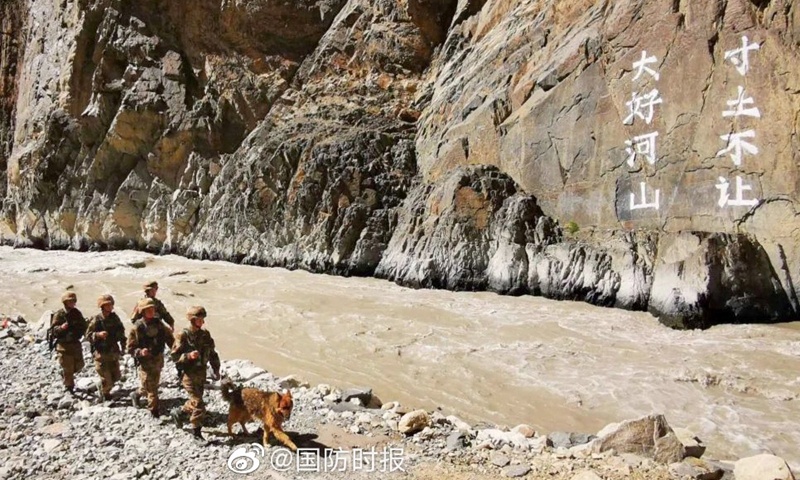 While the Chinese are mourning for the four young soldiers killed in last year’s border conflicts with Indian troops after China officially revealed the details of casualties Friday, some Indian media and netizens are instead still hyping up China’s casualties and doubting the timing of China’s release of the information, which Chinese experts slammed as self-deception and a failure to understand China’s kindness and sincerity to ensure smooth completion of the ongoing disengagement process.

On Friday, China unveiled for the first time the casualties and details of the five officers and soldiers, four of whom died when dealing with the Indian military's illegal trespassing of the Galwan Valley Line of Actual Control (LAC).

A PLA Daily report on Friday also released some video footage of the incident - how the Indian military deployed a large number of soldiers who premeditatively hid, trying to force the Chinese military to concede. How the Chinese soldiers defended the sovereignty of the country amid attacks from steel tubes, cudgels and stones was also highlighted.

The report led Chinese netizens to flood to social media platforms mourning the heroes who fought and made sacrifices for the country, praying for peace. However, on the contrary, some Indian media still exaggerated China’s casualties on social media platforms, claiming China suffered more than 40 deaths, and doubted the so-called eight-month delay for China in releasing information and footage.

The PLA Daily’s report also triggered heated discussion among Indian netizens with some saying China is hiding the real death toll, citing previous foreign media reports claiming China suffered 45 deaths. Some others doubted why China delayed the release of the casualties by about eight months while India released its casualties soon after the clash.

It is not surprising that they are doing this to deceive themselves, boasting about the so-called success of India, as what China released is totally different to what they have been hyping, Chinese experts said, noting that the recordings China showed have debunked the Indian media’s lies.

The Indian media’s data is based on speculation and self-deception, but what we showed to the world are authentic records and data, Tian Guangqiang, assistant research fellow with the National Institute of International Strategy at the Chinese Academy of Social Sciences, told the Global Times on Saturday.

“The recording has broken India’s lies as it shows that it is India who started the provocation and China has always been trying to solve the issue through peaceful means,” Tian said.

Tian noted that the PLA did not release the casualties and details until the situation eased and the two sides kicked off disengagement.

“It is a sincere move from China to avoid exaggerating confrontation or stimulating sentiment from people on both sides, but Indian media failed to understand China’s kindness,” Tian explained.

On February 10, Chinese and Indian troops started simultaneous and planned disengagement in the Pangong Lake area in accordance with a consensus reached during the ninth round of corps commander-level meetings after a border standoff.

Chinese experts hailed the disengagement and withdrawal of troops as a key breakthrough that will ease border tensions and hopefully lead to peace and stability in the short to medium term.

Qian Feng, director of the research department at the National Strategy Institute at Tsinghua University, told the Global Times on Saturday that although some Chinese netizens could not accept the facts China released about the clash at the LAC, the Indian military would continue the disengagement process as planned.

Qian warned of the possibility of a slight delay in the withdrawal by Indian troops with an excuse of “technical reasons.”

“They may doubt that China totally pulled out its forces according to the agreement and slowed down their own process; or Indian leaders change ideas and order their frontier soldiers to slow down. But so far, there has been no such indication,” Qian said.

On Thursday, Chinese Foreign Ministry Spokesperson Hua Chunying said at a press conference that the disengagement is progressing smoothly in general.

“We hope both sides will continue to move towards each other, strictly comply with the consensus reached and agreements signed, and ensure the smooth completion of the disengagement process,” Hua noted.