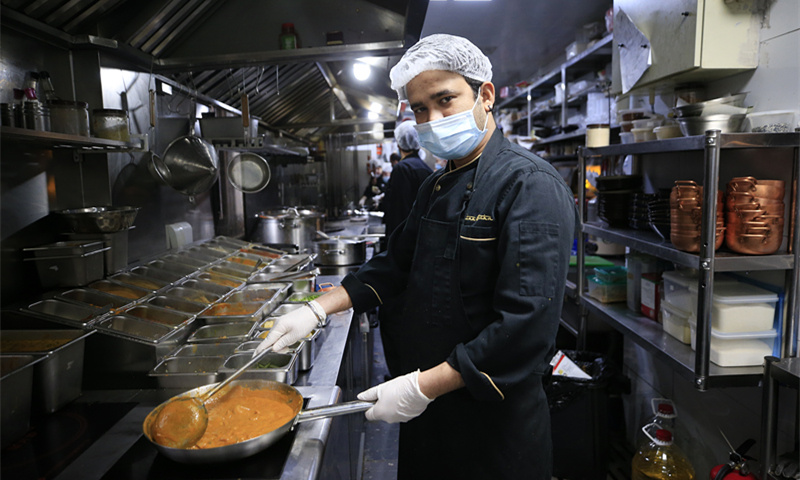 An India man works at an Indian restaurant in Shanghai's downtown Jing'an district on January 22, 2021. The restaurant says all its Indian employees have voluntarily received COVID-19 vaccination in Shanghai. (Photo: Global Times)

The Indian community in China is positively embracing Chinese developed COVID-19 vaccines, despite some international rumors and disputes about Chinese vaccines. Many Indians in front-line Chinese cities have been vaccinated in recent weeks, the Global Times found.

In Shanghai, where catering personnel are among the priority groups to receive the COVID-19 vaccination, several Indian restaurant staffers contacted by the Global Times on Friday said they had received shots.

"All we Indian staffers were voluntarily vaccinated," Jinbi, who is from India's Kerala state and works at an Indian restaurant in Shanghai's downtown Jing'an district, told the Global Times.

The restaurant Jinbi works for has some 10 Indian employees, all of whom received the first shot of the COVID-19 vaccine earlier this month under the guidance of the local market administration authority. They are waiting for their second shot.

Jinbi said he felt a bit tired after receiving the first shot, and some of his colleagues had muscle soreness. None had severe side effects.

"I made no bones about receiving the vaccination," he told the Global Times at the restaurant on Friday.

Similarly, an Indian restaurant in Beijing's Sanlitun shopping area told the Global Times via phone that all its three Indian employees have registered for the voluntary COVID-19 dose, which is likely to be carried out in days.

Currently, the official vaccination registration for general expatriates is not yet available in most parts of China. However, some regional governments offer priority inoculation to local foreigners engaged in higher-risk industries, including healthcare, education, catering and logistics.

It nonetheless doesn't dampen the expectations that Indians in China hold toward the vaccines. Some told the Global Times that they trust Chinese COVID-19 vaccines and are looking forward to receiving a dose in China.

"I would like to get vaccinated here," said an Indian man engaged in the art industry in Shanghai. Besides health considerations, getting vaccinated will make his future travel from and to China easier, said the man, who prefers to be anonymous.

Confident with Chinese COVID-19 vaccines, the man said he doesn't have concerns about their efficacy or safety.

"We feel that they have been tested well," he told the Global Times on Friday. "As we hear from [the] news - healthcare professionals, logistics professionals and teachers have already received the vaccination, and we haven't heard of any issues."

"On the first day, we administered less than 200 Covaxin doses," it quoted Rajender as saying.