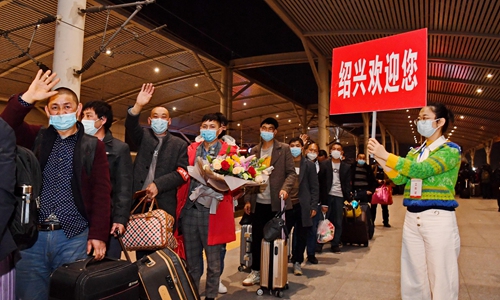 Hubei workers are carefully making their way to jobs outside the province as new domestic COVID-19 infections gradually dry up in China. The resumption of work, much anticipated and urgent for those workers and their employers, won't give rise to a new round of infections, as a two-month lockdown proved the workers are not pathogen carriers.

Additionally, their journeys were carefully orchestrated and they had a routine quarantine afterwards, said health experts.

According to Zhang, the returnees with health certification can resume work at the earliest time. He revealed that the Shaoxing government would choose workers from cities of low infection risk in Hubei, and who live close to railway stations, which is more convenient for transporting them.

The Enshi government was in charge of sending the chosen workers to the railway station via chartered bus; after arrival in Shaoxing, they will be sent directly to the quarantine point, according to Zhang. He also said a "health code" mobile phone-based monitoring system enables them to trace the workers' health condition.

Zhang said the transpotration fee will be covered by Shaoxing government.

Ying Yong, Party chief of Central China's Hubei Province, waved goodbye to more than 600 workers from Jingzhou, Hubei on Thursday as they set forth on their journey back to work in South China's Guangdong Province.

Ying urged people nationwide to treat Hubei people well, as they made a great sacrifice and contribution to China's battle against COVID-19.

As new infections in Hubei gradually dry up, city governments are loosening strict travel restrictions. Checkpoints, apart from those installed on the way out of Hubei, and on routes in and out of Wuhan, were removed, media reported on Wednesday.

"It is necessary to help those Hubei workers back to work," said Wang Ping, a human resources manager from Zhejiang Jiaren New Materials Co., who specializes in producing chemical fiber, told the Global Times. A total of 41 workers came back on Shaoxing's special train to the company.

"Our company has high requirements for employees' professional skills. Those workers' return can guarantee the company's production. If they were still stranded in Hubei, we would take at least another month to train newcomers," said Wang, noting the company is going to pick up workers after their quarantine ends.

The government of Yiwu, Zhejiang Province, told the Global Times that 146 people arrived in Yiwu from Hubei on Sunday. They had undergone several health checks, and would return to work immediately without being quarantined.

Yuan Xiao, a resident in Xiantao, Hubei, said people need three documents to go back work outside the province: a health document issued by the local government in Hubei, a resuming work certificate and a reception approval granted by the government of their employers.

A Danjiang resident surnamed Zhang, who runs a clothing company in Aksu Prefecture, Xinjiang Uygur Autonomous Region, told the Global Times that the trains and flights remain suspended in Hubei, so many people choose private vehicles to travel outside the province.

"The current situation worries me. For me, the only choice is to take an airplane as Xinjiang is far away; also according to Xinjiang's regulation, Hubei incomers have to undergo a 14-day quarantine after they arrive," said Zhang the company owner, who is eager to resume operation of his factory.

China on Thursday reported no new local infections nationwide for the first time since the outbreak. Wuhan reported no new cases for two consecutive days since Wednesday, and the rest of Hubei has had no new infections for almost two weeks.

Many fear the gradual arrivals of Hubei workers in other provinces will give rise to new infections.

Their concern was brushed off by Zhou Zijun, a professor at the Peking University School of Public Health, who said that those people have been restricted for approximately two months, so they are unlikely to be pathogen carriers.

"Not to mention the governments have all orchestrated detailed plans to deliver and quarantine those workers. So the possibility of a new round of infection resulting from Hubei workers' return is very slim," said Zhou.