Infection of young children no indication of virus mutation: experts 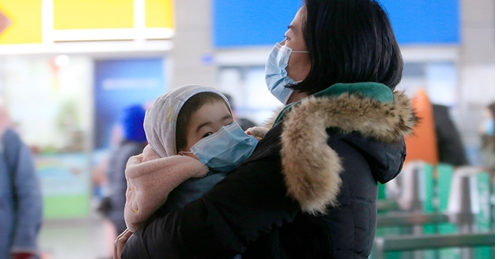 The rise in the number of children infected with the novel coronavirus does not indicate a new variant of the virus has emerged, but rather greater opportunities to contract the disease from sick family members, said the Chinese disease control authority.

An 11-month-old infant was confirmed infected with the novel coronavirus on Monday in Zhongshan, South China's Guangdong Province, according to the official WeChat account of the city government.

The young patient's father was earlier confirmed to have contracted the virus. Currently, the infant is under treatment at a hospital and is in stable condition.

As more children are sickened by the novel coronavirus, the public has become increasingly concerned.

This has not been caused by a variant of the virus, Feng Zijian, deputy head of the Chinese Center for Disease Control and Prevention, said in an interview with CCTV.

The increased number of cases is the result of increased opportunities individuals have of being exposed to the virus, Feng said.

"Children are vulnerable to viruses because their immune system is weak," He Quanying, a respiratory physician and professor at Peking University People's Hospital, told the Global Times on Tuesday.

In some cases, children have been infected by their parents at home.

He noted that people with pneumonia-like symptoms should go to the hospital for diagnosis and treatment, instead of quarantining themselves at home.

An increasing number of children infected with the novel coronavirus have been reported around the country.

Beijing confirmed a 9-month-old infant has been infected with the coronavirus, the Beijing Municipal Health Commission said on Sunday.

A 2-year-old child was confirmed to have contracted the coronavirus from her father in Ji'nan, East China's Shandong Province.

Another 3-year-old child in Ji'nan was infected by her mother, who in mid-January had visited Wuhan, Central China's Hubei Province and the epicenter of the epidemic.

"We have been closely monitoring for mutations in the virus, and there is no proof that the novel coronavirus has mutated," Li Bin, deputy director of the National Health Commission said at a press conference on Sunday.