CHINA Infections to rise if some countries refuse to put lives over politics: experts

Infections to rise if some countries refuse to put lives over politics: experts 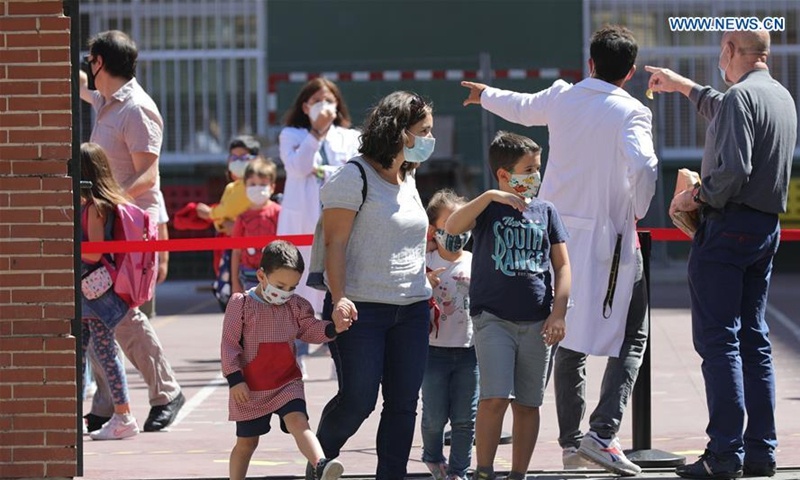 Parents pick up their children after school in Madrid, Spain, on Sept. 9, 2020. (Photo: Xinhua)

Experts warned that more people will be infected in fall and winter if some countries still refuse to put people's safety over politics and form a global mechanism, and continue to miss the chance to contain the pandemic.

India reported over 95,000 new COVID-19 infections on Thursday, bringing the total to 4.47 million, or about 16 percent of global cases. The country hyped its border tensions with China to deflect public anger at inaction on epidemic prevention.

On Thursday, France and Spain both reported their highest daily increase of COVID-19 cases of 9,843 and 10,764, respectively.

This is the first time for mankind to collectively face a disaster in the 21st century. People, whether or not they are safe from COVID-19, have reason to be concerned about the rise of the pandemic, especially as the outbreak has lasted nine months, with a vaccine not  fully developed.

At Thursday's press briefing, WHO Director General Tedros Adhanom Ghebreyesus expressed his concerns. "When solidarity is lacking and when we are divided, that's a very good opportunity for the virus, and that's why it's still spreading."

The epidemic continues to spread in the US, with over 29,900 infections on Thursday. With total infections at over 6.4 million, the US death toll is about to surpass 200,000, or 22 percent of the global death toll.

Analysts believe that the irrational, unscientific and even intentional anti-WHO actions of some countries have prevented the curbing of the pandemic.

Many people living in China are asking, what if some Western countries do not politicize China's anti-pandemic efforts? What if Trump does not downplay the coronavirus but makes decisive measures? What if the UK does not boast of herd immunity as an appeasement strategy? And what if India saves lives instead of provoking China?

Xue Lan, a professor and former dean at the School of Public Policy and Management of Tsinghua University in Beijing, told the Global Times on Friday that public health experts from WHO have warned of the risks of a fall rebound. With the previous outbreak not fully contained, if preventive measures are not taken immediately, there will be resurgence, which is unlikely to be as severe as in the first half in 2020.

Zhong Nanshan, 84, China's top epidemiologist, said on Tuesday after being presented a national medal and honorary titles, that this is only the first phase, and the pandemic is far from over.

For countries undergoing herd immunity in a passive and silent manner like the US and India, Xue said their governments have a responsibility to tell people whether they would rather bear the economic costs of strict control or deaths from lax controls.

China's action proves that the Chinese government believes in people's lives above everything else, Xue noted.