After taking tours of several lemon-growing bases in Tongnan, the sales director of Russia Green Planet signed a 600 million yuan ($85.2 million) purchase order with a local company on Nov 14.

Shortly after that, fresh lemons were loaded on a China-Europe freight train in Chongqing and appeared in Russian markets eight days later.

Adamia said the high quality and reasonable price of Tongnan lemons attracted him to the produce.

Located 30 degrees north of the equator with an average annual temperature of 17.9 C, Tongnan and its surrounding area is one of the world's top lemon-producing areas, along with California and Sicily.

The lemons of Tongnan, however, are largely unknown in the international market as its landlocked location means transporting them is costly and takes time.

"Cargo from Tongnan used to take at least 40 days to reach Moscow, but fresh lemons only have a shelf life of up to a month," Adamia said.

Thanks to the China-Europe freight trains launched under the Belt and Road Initiative, Tongnan lemons can now reach Russia in eight days, and Western Europe in 13 days. 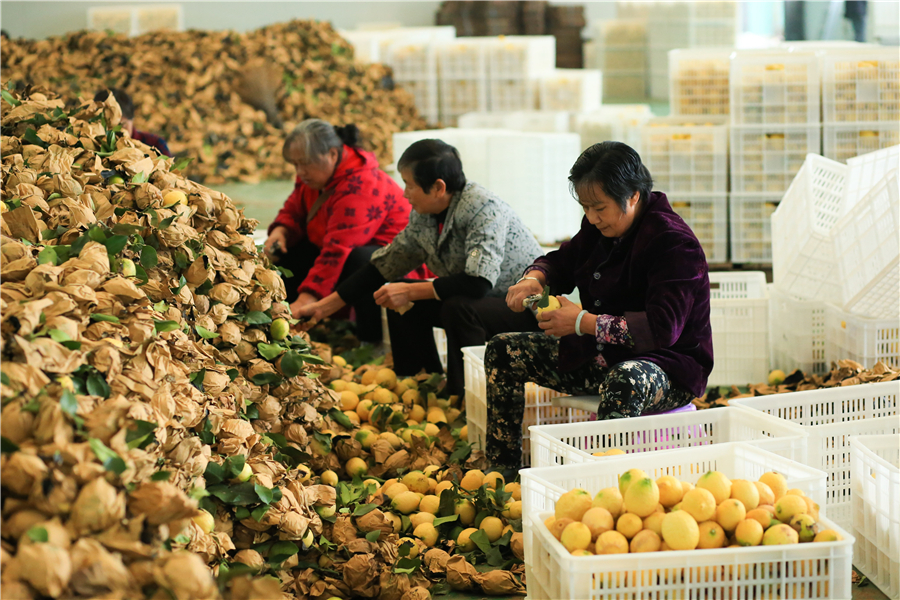 The lemons are also sold to Southeast Asian countries, including Singapore and Indonesia.

Thanks to the launch of the New International Land-Sea Trade Corridor, transport time between Chongqing and Southeast Asian countries has been cut by over 10 days, Zhong said.

Launched in 2017, the corridor has been gaining steam as its rail-sea routes offer faster and cheaper freight transport options between western China and other countries and regions. "We have established a long-term supply relationship with Tongnan. We look forward to winwin cooperation," Zhong said.

The lemon-growing area in Tongnan has increased from 7,333 hectares in 2015 to over 20,000 hectares this year, with an annual output of over 3 billion yuan.

Last year, Tongnan produced around 350,000 metric tons of lemons, half of which were exported to more than 30 countries and regions.

The local government has teamed up with enterprises to boost the intensive processing of lemons, turning the fruit into products with higher added value.

"Tongnan's deep-processing products based on lemons are mainly sold at home. We are making efforts to accelerate the expansion of overseas sales channels," said Chen Changshu, an agricultural official of Tongnan district.