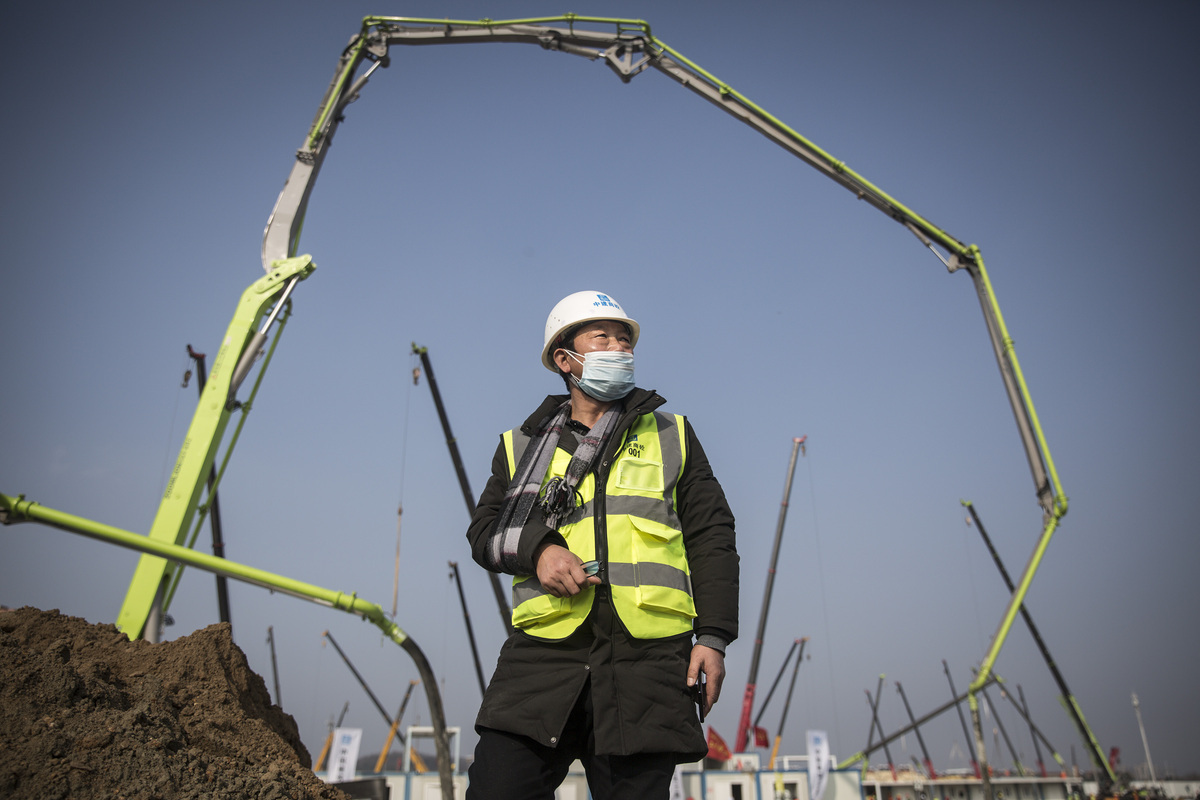 Yuan Tianxiong, with his fractured right arm, works at the construction site of the Huoshenshan Hospital in Wuhan, Hubei province. (Photo: qq.com)

In just 10 days, construction of a new 1,000-bed hospital in Wuhan, Hubei province, for novel coronavirus patients was completed and made ready for use on Sunday.

The miracle was possible thanks to thousands of workers－more than 7,000 at one time－who labored day and night.

Yuan Tianxiong, a 54-year-old manager of a mixed concrete plant under China State Construction Engineering Corporation, was one of them.

Based in Wuhan, he got a call on Jan 23 asking him and his team to join in the construction of the Huoshenshan Hospital designed for receiving highly contagious pneumonia patients.

"Most of my staff had returned home for the Spring Festival holiday, and I had just seven people available, including an electrician, a truck operator, two quality inspectors and a cook," Yuan said.

Moreover, Yuan was recovering from a bone fracture. On Jan 2, he broke his right arm in an accidental fall at home.

But thinking of his cousin, who had died of pneumonia caused by the virus just a few days before, he agreed. "I realized the severity of this virus outbreak after Wuhan's lockdown and my cousin's death," he said.

To avoid drawing too much attention to his broken arm, his wife replaced the white bandage he had on it with an old scarf, which accompanied him throughout the 10-day construction effort.

The first task for his team was to provide 3,000 cubic meters of mixed concrete. To do this, they needed to transport about 2,000 metric tons of mud and sand to the construction site.

Starting from 2 pm on the eve of Lunar New Year, he led the seven-member team and transported the material until the wee hours of the following morning.

Fortunately, the number of workers and amount of construction materials increased day by day as thousands joined the effort. "I have never seen or even imagined a project done within such a short period and in such a rushed way," he said.

The construction workers operated about 1,000 machines around the clock. Yuan said he had not slept well for days because of the demanding work.

The project required that concrete be strengthened rapidly. Concrete usually hardens in about 10 hours, but the workers took efforts to have it harden in half the time.

Yuan often got calls at midnight, and in turn he would also call drivers of cement mixer trucks to keep them awake, because "they would easily fall asleep after working for a long time," he said.

His son, who works abroad and had no knowledge of the project, called him, asking him to rest well for better recovery and to avoid crowds to reduce risks of infection. Yuan said OK, but he knew the place where he worked was probably the most crowded area in Wuhan at the time.

"I just hoped that we can build the hospital faster so that more people can be saved in time, which will make all our efforts worthwhile," Yuan said.