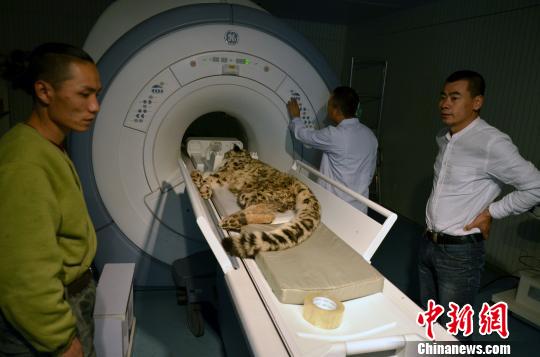 An injured snow leopard found 25 days ago in northwest China's Qinghai Province has now recovered, local authorities said Saturday.
The animal was spotted on October 16 by a herdsman in Nangqian County of Yushu Tibetan Autonomous Prefecture. It was unable to move with injuries to its legs, according to the herdsman.
The snow leopard was taken to a nearby monastery to be cared for. It was diagnosed two days later with lumbar damage after experts from Beijing Forestry University arrived in the prefecture.
The snow leopard was then taken to the provincial wildlife protection and breeding center in Xining, capital of Qinghai.
The female snow leopard is less than four years old and could not stand on her own on October 28, said Qi Xinzhang, deputy director of the wildlife protection center.
"After treatment, she could stand on her own on November 3, and we are expecting to release her to the wild soon when we believe she is ready, said Qi.
Snow leopards are a Class A protected animal in China. They live in the Himalayas in central and south Asia at an altitude of 2,500 to 4,500 meters. They have been recorded in China's provinces of Gansu, Qinghai, Sichuan and Yunnan, and autonomous regions of Tibet and Xinjiang.
The animal has rarely been seen in the wild this century due to loss of habitat and poaching.