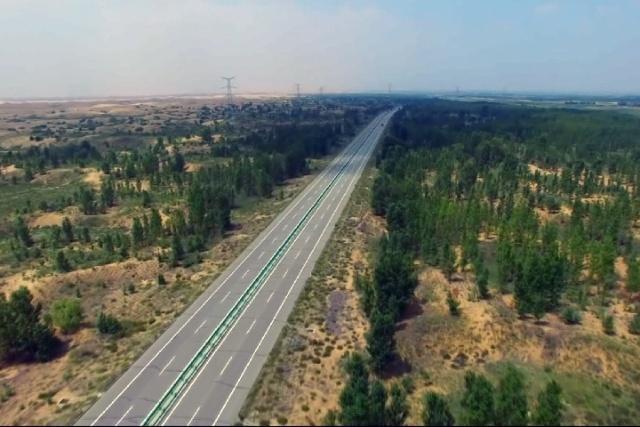 President Xi Jinping recently joined deliberations with lawmakers from Inner Mongolia during this year's two sessions－the annual meetings of China's top legislature and its top political advisory body－attaching great importance to a strategic focus on ecological civilization and a green development path, with ecological protection as the priority.

He called for a strong fight for the protection of blue skies, clear water and pure land, and encouraged joint efforts from local people to safeguard the forest belt in North China, which is known as the "Green Great Wall".

Zhou Yizhe, a team leader at a State-owned forest farm in Inner Mongolia and an NPC deputy, was a logger for 35 years and now works as a forest ranger.

"From selling wood to protecting the forest for a better future, my personal experience definitely shows the benefit of eco-friendly development," he said.

The forest farm where Zhou works belongs to the Three-North Shelterbelt Project, a massive tree planting project initiated by the central government in 1979 in a move to address desertification.

Also known as the "Great Green Wall," the project is a forest belt from Heilongjiang province to the Xinjiang Uygur autonomous region. It connects 13 provinces, municipalities and autonomous regions.

Sitting in the middle of the forest belt, Inner Mongolia, which used to suffer from desertification, has witnessed great changes due to the afforestation efforts.

Now, it owns 26.1 million hectares of forest thanks to decadeslong afforestation efforts, according to the region's government.

Since April 2015, all commercial logging has been banned in the autonomous region, and at least 800,000 hectares of sandy land have been planted with grass or trees annually over the past five years.

"We used to worry about our future after commercial logging was banned five years ago," he said. "But the well-protected forest now brings us an even greater future promise via new industries, such as eco-friendly tours."

According to the National Forestry and Grassland Administration, the ongoing project is estimated to plant forest covering a total area of 35.6 million hectares by 2050.

By then, forest coverage in the region aims to increase 15 percent, up from 5 percent in the 1970s.

"During the two sessions last year, President Xi had emphasized the importance of eco-protection, and his remarks this year will guide us again on our future development path," said Chen Liang, an NPC deputy from Inner Mongolia.

As deputy head of the forestry department in Inner Mongolia's Hinggan league, Chen said strict regulations have been implemented to prohibit illegal use of local grasslands in past years.

Since July, he has been working in the league's Baiyin village and has been encouraging local farmers to grow oats and alfalfa, both of which he said are green commodities that provide them with both a stable income and a better environment.

During this year's two sessions, other ideas, such as promoting ecological civilization with high-tech support, were also raised.

"Scientific analysis of details of each element in the ecosystem will contribute to better protection, utilization and reparation of the ecosystem. It will play a guidance role to promote ecological industries to develop the right way," he said.