Inner Mongolia to spur innovation in efforts to combat desertification 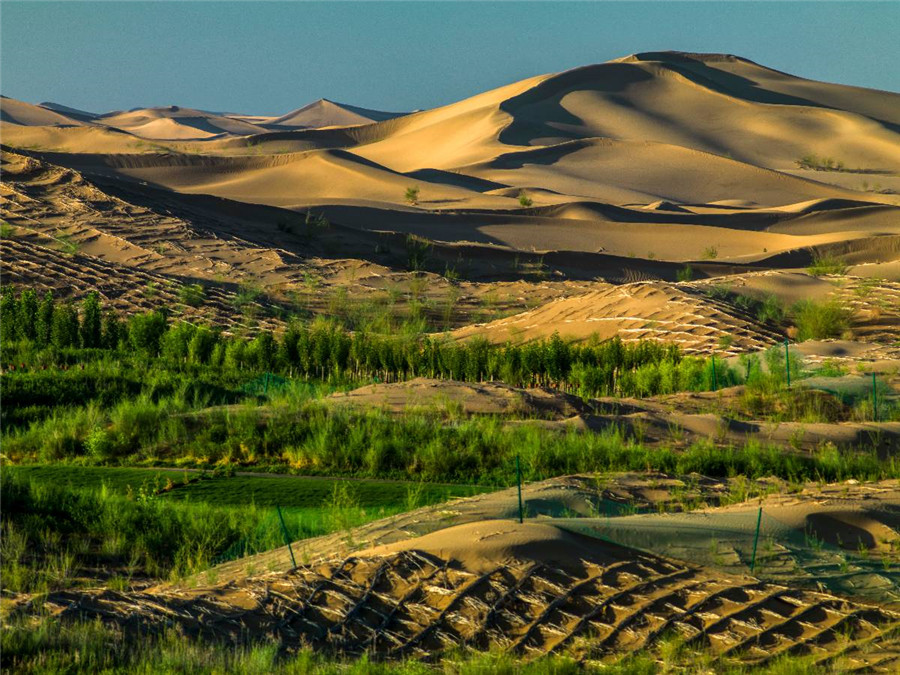 The use of sand barriers is helping transform hundreds of acres of northern China's Kubuqi Desert into the green landscape. (Photo: China Daily)

The Inner Mongolia autonomous region will encourage innovative ways to control desertification and contribute its experiences to more regions in the country as well as around the world.

"In past decades, Inner Mongolia has witnessed a green miracle. In the future, we will conduct strict surveillance of the grassland via satellite remote sensing technology," said Mu Yuan, head of the region's forestry and grassland bureau.

He also said the forestry department will promote the technological transformation of grassland recovery and help other regions at home and abroad to fight desertification, bringing more green to the world.

"More innovative ways are encouraged to control the sand for a better ecological system. We will also support cooperation between organizations in Inner Mongolia and other regions both at home and abroad," Mu said.

With 88 million hectares of grassland accounting for 74 percent of the region's area, Inner Mongolia is an important ecological shelter in North China.

However, the region is also home to China's seventh-largest desert - the Kubuqi Desert - which covers 13,900 square kilometers.

Over past decades, more than 6,000 sq km of the desert in the Kubuqi have been turned green due to collective efforts from local governments, enterprises and other organizations. Led by a local enterprise, Elion Resources Group, the greening campaign created wealth of more than 500 billion yuan ($70.2 billion) and provided about 1 million jobs to locals.

A "Kubuqi Model" in desertification control has gradually taken shape over the past 30 years, featuring balanced development of ecology, economy and livelihood. Elion's anti-desertification experiences have benefited Beijing, Qinghai province and the Xinjiang Uygur and Tibet autonomous regions.

In addition, the group's techniques have also been used in many massive ecological programs, including Yangtze River Ecological Park and Qilian Mountain National Park.

The Kubuqi Model is highly appreciated by international communities.

During the 7th Kubuqi International Desert Forum held in the Ordos, Inner Mongolia, in July, countries involved in the Belt and Road Initiative including Pakistan, Saudi Arabia and Kazakhstan negotiated with Elion to help them improve their local ecological systems through greening.

"We will exploit new ways to enhance our ability to control the sand with the help of modern technologies, such as drones, AI, big data and internet of things," said Ao Baoping, chief executive officer of Elion Green Land Technology.