CHINA Innocent man gets 880,000 yuan compensation after 7 years in jail

Innocent man gets 880,000 yuan compensation after 7 years in jail 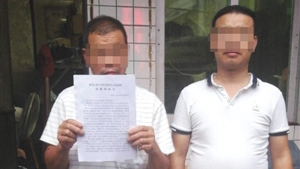 A Chinese man who was wrongly sentenced and imprisoned for eight years has finally been awarded compensation of 880,000 yuan (118,000 US dollars).

Zhang Jun was sentenced in 2008 to 20 years in jail for allegedly taking part in two robberies in northeastern Heilongjiang Province, although he argued that he had never been to the area and was actually working in a factory in southern Guangdong Province at the time.

Zhang, who had a previous conviction for theft in Guangdong in 2002, was identified by other members of a four-man Heilongjiang gang who robbed two women of 90,000 yuan, according to prosecutors.

Acting on this evidence, the court rejected Zhang’s defense and later also sentenced Zhang’s father and his two friends, who provided Zhang’s alibis, to jail for perjury.

Zhang's fortunes began to turn when one of the gang members, with a surname of Gao, belatedly concluded that Zhang, a worker, was not the one involved in the robberies with him.

“Then why do you identify me since you didn’t even know me?” a surprised Zhang said he responded,  reported The Beijing News.

Gao said that when he and his colleague were asked to identify their companion, the light was dim and the photos were vague, so they just identified the person “according to their rough impression.”

There was a known suspect, whose surname is Xia, at the time and the unidentified fourth suspect was thought by police to be a friend of Xia's from an earlier prison term. It so happened that Zhang served time with Xia in 2002.

When Xia was finally caught by police in 2015, he confessed that Zhang did not take part in the Heilongjiang robbery.

“I never knew I was wanted by police until they detained me,” said Zhang, who comes from the southwestern Sichuan Province.

“My father never gave up"

When Zhang was first detained by police in 2008, his father found two colleagues at the factory in Guangdong to give evidence on his son's behalf that he was at work when the robbery took place. But they were not believed and the three of them were sent to prison for “concealing the robbery for Zhang” – the elder Zhang for one year and the others for six months each.

After he was released, Zhang’s father continued to protest his son's innocence and found new lawyers to push his case.

Finally, after years of appealing, the court quashed Zhang’s conviction, ruling that it had been based on insufficient evidence, a vindication of the father's campaign.

A year after his release in 2017, Zhang has finally received compensation payment for 880,000 yuan from the court in Daqing, a city in Heilongjiang.

He told The Beijing News, “I want to thank my father, who never gave up appealing for me in nearly eight years. He has given me so much.”

After his release, Zhang went back to Guangdong but found that some things had changed. “I don’t even know how to use a smartphone and I haven’t got married, just because of this case,” he said. “Despite the vindication, I still want an apology from the police officer who handled the case. As long as he just goes out and apologizes to me, I will feel better.”