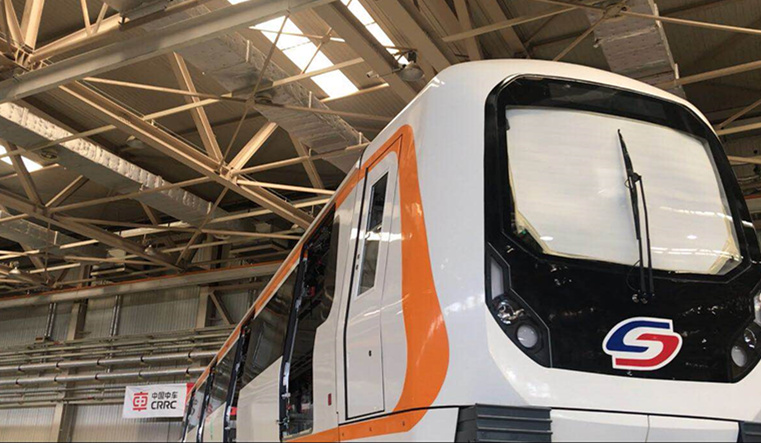 The giant assembly hall has a length of 300 meters and a width of 60 meters. The single assembly line can produce light rails, trams, monorails, and high-speed rails, including the Fuxing, or the Renaissance EMU, the country’s fastest bullet train model.

Even though its space is huge, only a small number of workers are needed in the plant. On the assembly line, a self-developed intelligent manufacturing system—the MES (Manufacturing Execution System)—is collecting data, monitoring the work process, and conducting intelligent verification, which greatly minimizes the impact of human factors on its products, processes, efficiency, and quality.

“This style of management greatly improves our work efficiency. It used to take us a month to make 24 light rail cars. Now we can make two a day,” said Shi Qingsong, chief engineer of the manufacturing plant.

The company takes up over 60 percent of the market for large railway passenger cars in China. And last year, it accounted for over 25 percent of the country’s entire urban rail transit market.

Driven by independent technological innovation, a number of advanced high-end products have been created here. Among the company’s 200-plus passenger train products, self-produced innovative products account for over 98 percent.

Stepping foot into the company, the first thing that will catch your attention is a large globe. “The marks on this globe represent the places where our products are sold,” said Shi Qingsong.

With a full set of products in high-speed and inter-city trains, the company is actively seeking to expand into the global market. Its products and services can be found in 14 countries and regions. Today, Chinese trains made by CRRC are running in India, Malaysia, Kenya, and other places.

It is the first professional company specializing in the design, production, integration, and sales of monorail and APM rail transit vehicles and systems in China. It has successfully supported the APM projects in the airports of Hong Kong and Shenzhen, as well as the straddle-type monorail project in Wuhu City, Anhui Province.

“Our monorail not only has big prospects in China’s domestic market, but also in the global market,” said Romain Sevestre, a French-national who works as the international biding manager for PBTS. According to Sevestre, medium-capacity monorail is a highly efficient and environmentally friendly alternative to metros, and therefore has huge market potential.