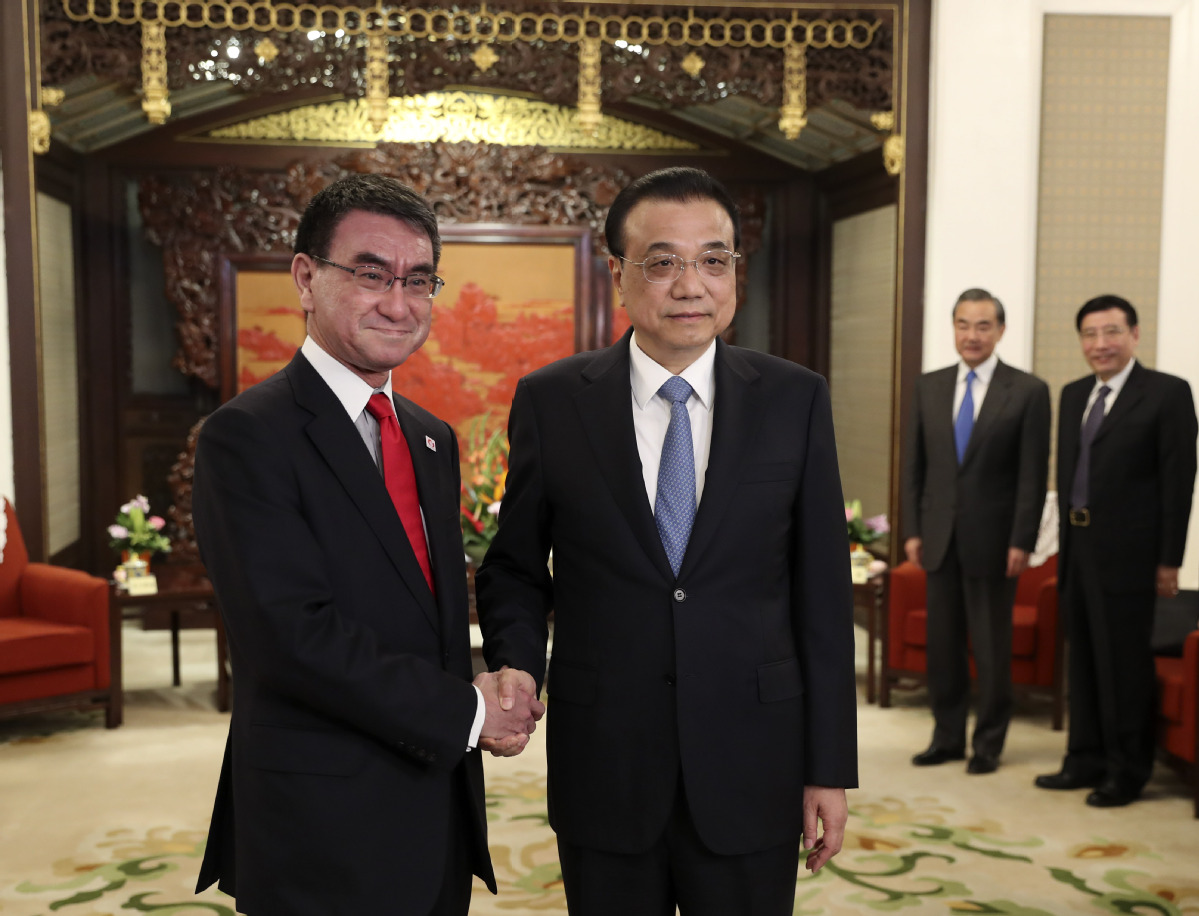 Premier calls for fair business climate for enterprises from both countries

Premier Li Keqiang called on China and Japan to boost cooperation in innovation to see more pragmatic outcomes, and to further work together in areas including finance, third-party markets and tourism.

The two countries should also create a fair and unbiased business environment for each other's enterprises, Li said in a meeting with visiting Japanese Foreign Minister Taro Kono in Beijing on Monday.

The meeting came after a China-Japan high-level economic dialogue, co-chaired on Sunday by State Councilor and Foreign Minister Wang Yi and Kono. The dialogue, also attended by ministers of agriculture, industry, commerce and environmental protection from both countries, was also the first to be held in China between the two nations since 2010.

Li congratulated attendees on the successful hosting of the dialogue in his opening remarks, noting that bilateral relations are back on the right track and have seen new progress thanks to joint efforts of the two sides starting last year.

On the basis of the four China-Japan political documents and in the spirit of seeing history as a mirror as well as facing the future, the two nations should continue to work toward the long-term, healthy and stable development of bilateral relations, he said.

As major economies in the world, China and Japan both support free trade and obey WTO rules, Li said.

He also welcomed Japanese businesses to expand investment in China as the country will continue to unwaveringly deepen reform and expand opening-up.

China stands ready to move forward with talks with Japan and other related parties to further the negotiations regarding the Regional Comprehensive Economic Partnership as well as the China-Japan-Republic of Korea Free Trade Agreement, he said.

Li also voiced China's support for Japan's hosting of the G20 Summit, which is slated this year to be held in Osaka, and he hoped it would inject fresh impetus into global economic growth.

Kono expressed his appreciation for efforts made by the Chinese premier in helping return bilateral relations to the right track.

The two sides can help jointly find solutions to global and bilateral issues despite remaining difficulties in bilateral relations, he said.

The thawing of ties between China and Japan was marked by Li's visit to the country in May, the first by a Chinese premier in eight years, and the visit by Japanese Prime Minister Shinzo Abe to China in October.

The economic dialogue between the two countries was launched in 2007, and deteriorated relations due to disputes over a number of issues resulted in an eight-year hiatus until last April, when the two sides restarted with the fourth round of dialogue in Tokyo.