HANGZHOU, Oct. 4 (Xinhua) -- Fu Qicai has had his hands full recently, a stark contrast to several months ago, when he feared the company he worked for was at risk of going under. 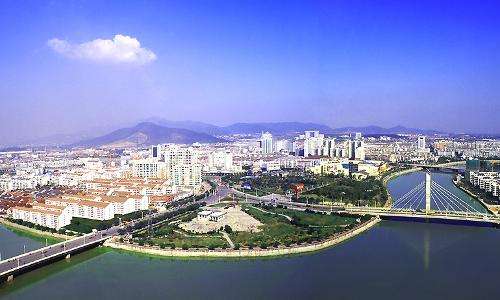 "Orders have almost been full this year, and our annual output is expected to reach 600 million to 700 million yuan (about 88 million to 102 million US dollars), more than double that for last year," said Fu, general manager of Nacacare Cosmetics Co., Ltd. in Huzhou, east China's Zhejiang Province.

Located in Moganshan High-tech Industrial Development Zone, Nacacare Cosmetics, founded in 2017, is a professional cosmetics manufacturing enterprise with more than 90 percent of its products being exported to the European and North American markets.

However, its sales volume fell 80 percent at the beginning of this year when the novel coronavirus epidemic hit it unexpectedly and led to a severe supply chain disruption, logistics obstruction and other problems.

"Every moment was fretful," recalled Fu. "But I couldn't just sit there waiting to die."

In early February when the first batch of factories in Deqing County resumed production, Fu and the research team lived in the factory for 15 consecutive days, and successfully developed disinfection wipes in line with international standards.

He then began contacting global dealers and completed the sample testing process that should have taken about a year in just over a month.

In early April, samples from Fu's factory began to be sent to countries including the United States, Japan and Australia as well as some European countries. And in half a month, the company had received orders worth nearly 10 million U.S. dollars, reversing the sales volume growth from minus 80 percent to positive territory.

"With more supportive policies from the local authorities, I'm finally relieved," he said.

Nacacare Cosmetics is a microcosm of how the eastern city of Huzhou has revived foreign trade amid the pandemic.

From January to June, Huzhou's total foreign trade volume reached 50.7 billion yuan, up 11.8 percent year on year. Among the total, exports reached 45.35 billion yuan, an increase of 9.6 percent from the previous year.

Zhejiang Weikang Motor Co., Ltd. used to have 70 percent of its production capacity dedicated to manufacturing frequency conversion motors for big names such as LG, Daewoo and Electrolux. But the COVID-19 pandemic hit it hard and the company has turned its eye to the domestic market.

The company developed a new micro motor for hairdryers, which can increase drying efficiency fivefold.

"We have been planning to explore the domestic market, and the epidemic has accelerated our pace and investment," said Xu Xinkang, the company's general manager. Now orders for the new motor are steady at about 15,000 motors a month, which will help boost the annual output of the company to more than 350 million yuan.

"Innovation is the driving force and lifeline for the sustainable development of enterprises. Boosting the domestic market can also help enterprises keep pace with changes in the international market," said Ji Weihong, an official with the development, reform, economy and information bureau in Nanxun District, Huzhou City.