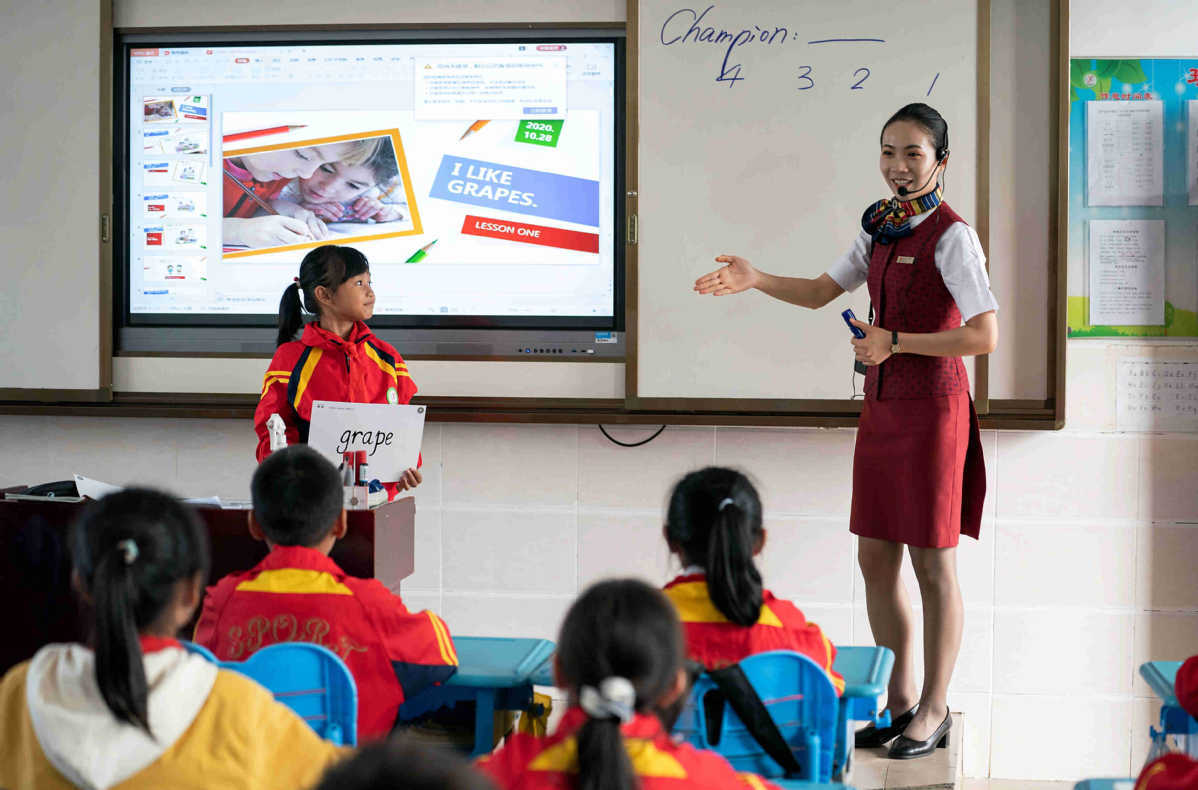 English lessons taught by civil aviation professionals at a rural primary school have not only improved the students' academic performance, but also brought them hope for a brighter future.

Full of confidence at the beginning of her stint, Xiao quickly found out some of the students were mischievous and didn't always follow her instructions.

Nonetheless, she shared her passion for her job with them and told them of her experiences as a flight attendant to make them attentive and inspire them to learn.

"Students are curious about my job and sometimes ask where I have been as a flight attendant. I tell them my work has taken me around the world," she said.

"One time, they asked me whether I had been to the United States or Europe. I said 'yes', but they didn't believe me until I showed them photos. They were very impressed and looked at me with admiration."

Xiao said she seized that moment to tell them that if they studied hard and stayed focused in class, they will one day get the chance to leave the village and see the world.

The English teaching program at Jiangkou Primary School was established by Air China in 2017 as part of the enterprise's poverty alleviation project to help the county tackle poverty. In 2015, Zhaoping was a poor county, with 69,900 people out of the 448,000 population living in poverty. Education was seen as crucial to stopping poverty from being passed on to future generations.

When the program began, Air China staff members signed up to teach at the school for a week. A total of 223 employees took part in the teaching project, according to the company.

Although well-intentioned, the short-term project fell short of expectations. The company adjusted the length of the program and recruited employees to teach for a semester. Eleven staff members, including Xiao, have signed up to teach at the school, which has 209 students, for a semester.

Li Chao, the school principal, said before the Air China program started, the school did not have any specialist English teachers, but other teachers at the school gave some English lessons.

The Air China employees who taught for only a week failed to help the students pass their English exams.

However, since the airline's employees started their semester-long stints in May, the academic performance of the students in English has greatly improved, Li said.

The school now ranks in the county's top tier for English education. "It shows that students have really learned well," Li added.

Qian Jiang, deputy head of the county, praised Air China for selecting employees with the right credentials to sign up for the teaching program.

He worked in marketing and human resources department for Air China before joining the county's poverty alleviation project in 2018.

"It's important for people to shake off the psychological negativity of poverty and get them to stand on their own feet," he said, adding that this was the role education should play in the poverty alleviation battle. Qian added that the program aims to get students to think about a brighter future and to learn from the company's employees who are excellent role models.

For the semester that started in September, the school has four teachers from Air China who all have strong backgrounds in English.

Xiao Xia passed the International English Language Testing System and the Graduate Record Examination at college and teaches Air China cabin crew members how to do broadcasts in English.

Yang has a student who wants to become a pilot. "I hope I can show them there are more options in life, not just being a migrant worker like their parents and other villagers," she said.

Hailing from a village in Hebei province, Yang was taught by a volunteer English teacher from the city when she was in primary school. She said the teacher planted a seed in her heart that inspired her to go outside the village, and her wish was to pass on a similar seed of hope to her students.

The civil aviation professionals also gain from the teaching experience.

Xiao said, "I used to walk in the cabin and now I walk in a classroom deep in the mountain, and it is an amazing experience."

"Students didn't open their hearts to me at first," Yang said. "But later, as we became closer, they trusted me and asked me to help them do things. I felt very satisfied offering to help."