Herdsmen in the Inner Mongolia autonomous region who embraced livestreaming during the COVID-19 outbreak have increased profits from their agricultural products with the help of local official Wu Yunbo, who is also a National People's Congress deputy. 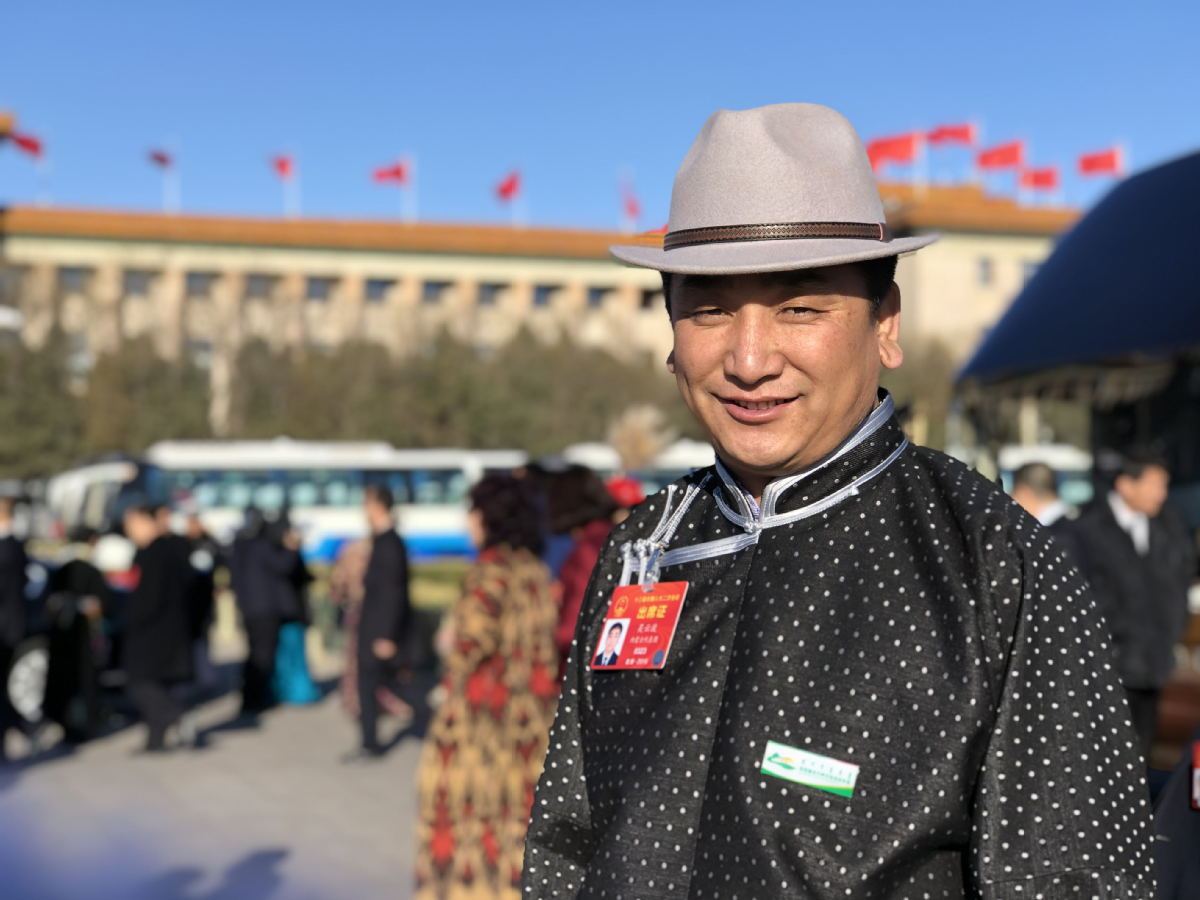 Wu Yunbo, a deputy to the National People's Congress, waits to enter the Great Hall of the People in Beijing for the legislative session last year. (File photo by China Daily)

In the past two months, the story of a cooperative at Dongsala, a village in Jaruug Banner, that mainly sells beef and mutton has gained nearly 1 million followers on Kuaishou, a popular short-video platform.

"It's very challenging for a man of my age to try livestreaming. But when I reminded myself that, as a Party secretary, it is my responsibility to help villagers overcome the economic slump due to the epidemic, confidence and encouragement filled me immediately," Wu said.

It was not the first time Wu has helped local farmers and herdsmen earn better livings through creative ways.

In 2013, he established a cooperative for raising cattle that allows both poor and rich farmers to hold shares.

"Rich families invested capital and were paid an annual year-end bonus, on average, of about 15 percent of their investment," he said. "The poor families can either loan their cattle to the cooperative or buy shares in the cooperative."

Poor families receive preferential policies. Wu said families who loaned two cows to the cooperative get one calf back every year in the first five years. Those who buy cooperative shares receive a 12 percent year-end bonus.

"We also hire poor farmers to work on the cooperative farms and pay their medical and other insurance, which gives them basic support in their daily lives," Wu said.

Farmers welcomed the cooperative, which has been successful in recent years. Thanks to the project, 71 families in the village and 55 families in nearby villages, all of whom were poor, had been lifted from poverty by the end of 2017.

The cooperative has since grown to develop an industrial chain that integrates the breeding, processing and sale of cattle. It now has assets worth 58 million yuan ($8.12 million) and annual output of 30 million yuan, Wu said.

He said increased demand for organic food had boosted their business as their cattle are raised on the country's largest grassland. Meat produced by the cooperative is famous for its quality and taste.

"President Xi Jinping's encouragement of our efforts during last year's National People's Congress in Beijing made our beef renowned nationwide. We are so honored," Wu said proudly.

Wu, who is a member of the Mongolian ethnic group, had invited Xi to visit his hometown.

Wu also spoke about how he had led poverty-stricken households toward prosperity through environmentally friendly development.

After listening to him, Xi encouraged Wu to build a strong brand for his enterprise and suggested a new model of high-quality development that prioritizes ecology and is oriented toward green development. Xi also asked how he could get to the village.

"We should not be tempted to sacrifice the environment in exchange for economic growth, or try to break through the red line of ecological protection just because we run into some economic difficulties," Xi said.

Recalling this unforgettable conversation with Xi, Wu said the president was not simply asking about the "roads" to the village, but future paths for villagers in China to move toward prosperity.

Keeping Xi's words in mind, Wu studied new ways to develop the local agricultural business. Over the past year he has cooperated with JD, one of the largest e-commerce platforms in China, to seek a bigger market.

During this year's NPC session, Wu will share a proposal on rural revitalization.

"We are calling for more college students to go back to rural areas and contribute their passion as well as knowledge to the development of their hometown," he said.

"Our cooperative has seen more college students in recent years who contributed a lot to the rapid development of our business, and we welcome more," he said.

"In the cities, they might be little birds. But back on the grassland, they will be eagles with a wider world."