NICOSIA, April 7 (Xinhua) -- Chinese Ambassador to Cyprus Huang Xingyuan has called on the international community to protect the trade liberalization in a recent interview with Xinhua.

The environment for trade liberalization is in need of protection, said the ambassador, adding that it takes hard work to establish a rule, yet only a minute to demolish it.

Huang said this while commenting on the "tariff stick" raised by the US government.

In a unilateral move, the US government announced that it would impose an additional 25 percent tariff on 50-billion-dollar imported products from China. 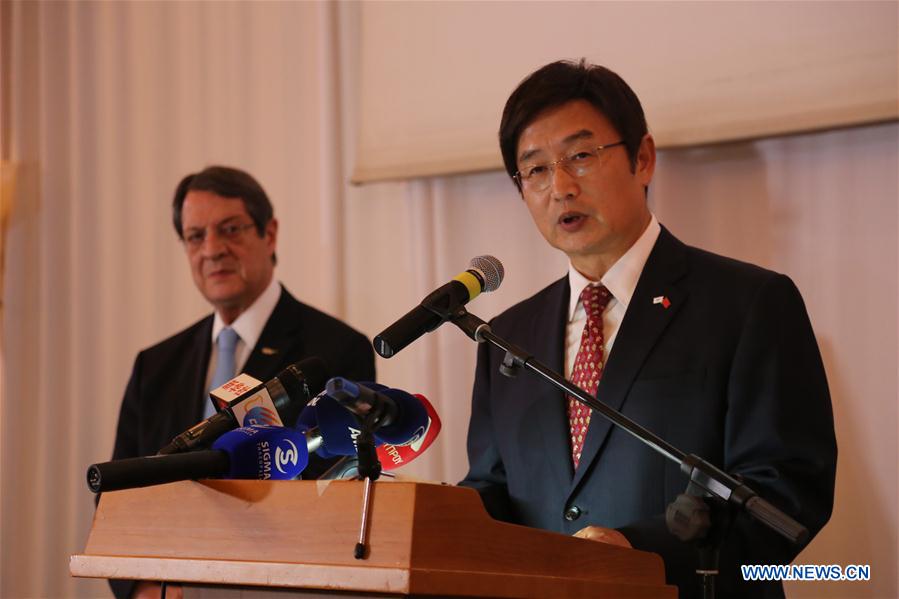 Chinese Ambassador to Cyprus Huang Xingyuan (R) delivers a speech at a reception marking the upcoming 68th anniversary of the founding of the People's Republic of China in Nicosia, Cyprus, on Sept. 27, 2017. (File photo: Xinhua)

The ambassador said China has set up a model in that it strives to maintain fairness and justice in international trade, and the Chinese leaders have sent a very clear message to the Americans on various occasions that China and the US have more common interests than differences and cooperation is the only correct choice for both.

He said China has reiterated its hope to work together with the United States to make the cooperation cake bigger, and asked the US to relax the control over the export of high-tech products to China as a way to narrow the trade deficit. China has refrained itself from joining the trade war with the US, noted the ambassador.

He said China serves as the largest contributor to the world economic growth and trade as well as the staunch supporter for world peace and development. Therefore the action of containing China's development is actually a betrayal of the world progress, especially when the world economy is just moving onto the track of recovery, he said.

Huang urged the US government to revoke its protectionist measures and avoid friction escalation.

The disputes between the world's two largest economies should be settled through dialogue and consultation, he said.