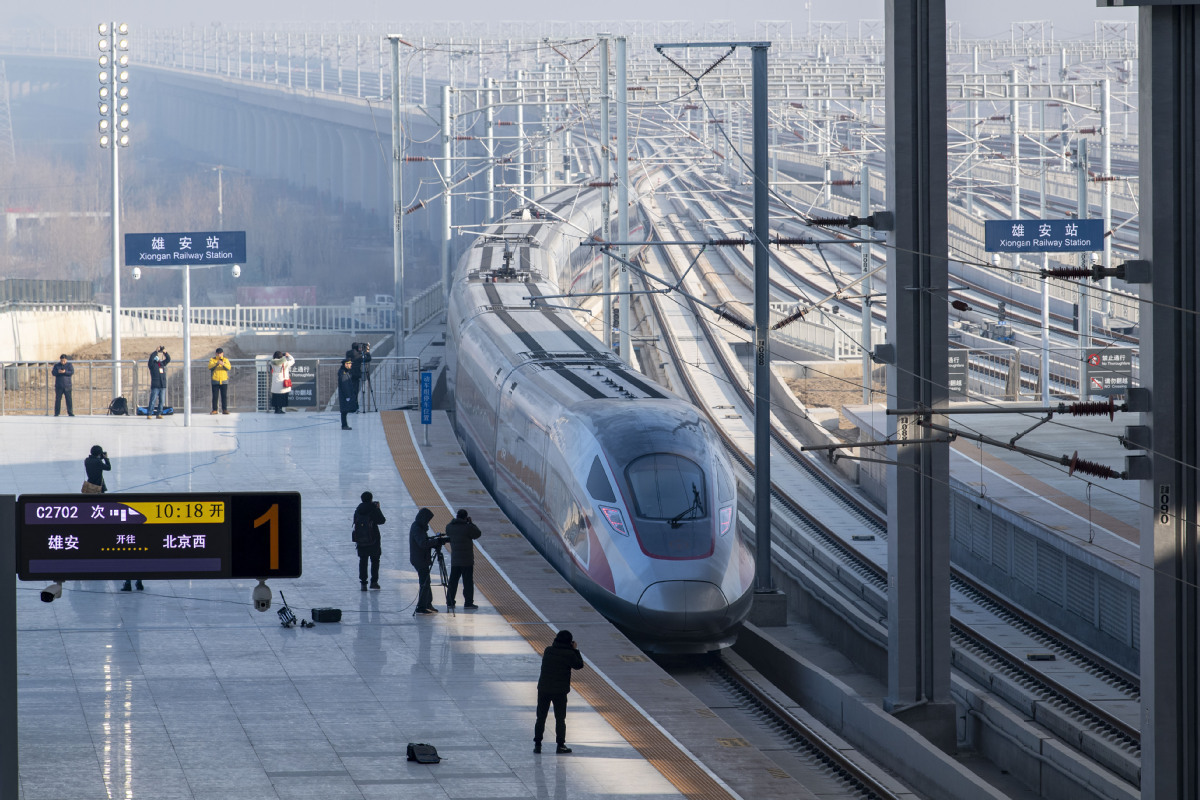 A train enters Xiong'an Railway Station, Hebei province, on Dec 27 as the Beijing-Xiong'an Intercity Railway is put to use. (Photo: China Daily)

When Li Jianhe left his hometown, the county of Rongcheng in Hebei province, for the megacity of Beijing in 1996, he was determined he would never go back.

To Li, as a college student at the age of 17, the small county－which is about two hours' drive from Beijing－represented backwardness and a lack of opportunity for him, in sharp contrast with the bustling capital.

However, two decades later, he made up his mind to leave Beijing and relocate to his hometown immediately after China announced the development of a new area in Hebei－the Xiong'an New Area, which spans three counties including Rongcheng－on April 1, 2017.

The national significance of the Xiong'an New Area is on a par with the Shenzhen Special Economic Zone and the Shanghai Pudong New Area.

Li's company, Jingxiong Group, a government affairs service provider, was among the first companies to relocate from Beijing to Xiong'an two weeks after the new area was set up.

"I made the decision after I derived confidence from the determined posture of President Xi Jinping to advance the coordinated development of the Beijing-Tianjin-Hebei region," said Li, who is founder and president of the company.

With Xiong'an set to mark its fourth anniversary on Thursday, a new intercity train has been launched between the new area and Beijing, and tens of thousands of construction workers are working on relocation programs, schools and a hospital. A future city is starting to take shape.

The development of Xiong'an is the landmark plan to coordinate the development of Beijing-Tianjin-Hebei, a strategy mapped out and carried forward by Xi, who is also general secretary of the Communist Party of China Central Committee.

"It is no exaggeration to say that General Secretary Xi is the chief planner for the integrated development between Beijing, Tianjin and Hebei," said Zhang Jie, a professor of economics and deputy dean at Renmin University of China's Beijing Academy of Development and Strategy.

The integrated development of the three neighboring-level areas was elevated to a national strategy in 2014 during a symposium chaired by Xi in Beijing.

While chairing a meeting of the Central Leading Group for Finance and Economic Affairs in 2015, Xi underscored that the goal of promoting the coordinated development of the three areas is intended to relieve Beijing of functions nonessential to its role as the capital, adjust economic and spatial structures, promote the coordinated growth of the region, and form a new engine of development.

In 2017, Xi made his first inspection trip to Xiong'an, which is at the center of the triangular area formed by Beijing, Tianjin and Hebei's capital, Shijiazhuang, and is designated to undertake functions no longer suitable to the capital.

The development of Xiong'an will be crucial for the next millennium, and the new area must be based on a new concept of planning and development and fully carry out the new development philosophy, he said in 2019 during his second trip to the area.

Xi underlined the importance of staying patient and maintaining the strategic orientation, saying that the planning and building of the new area must proceed with high quality and standards.

He also called for steps to integrate market elements including people, logistics and information and to promote the integrated development of information, strengthen the coordinated treatment programs for ecological and environmental protection, and enable the sharing of basic public services. 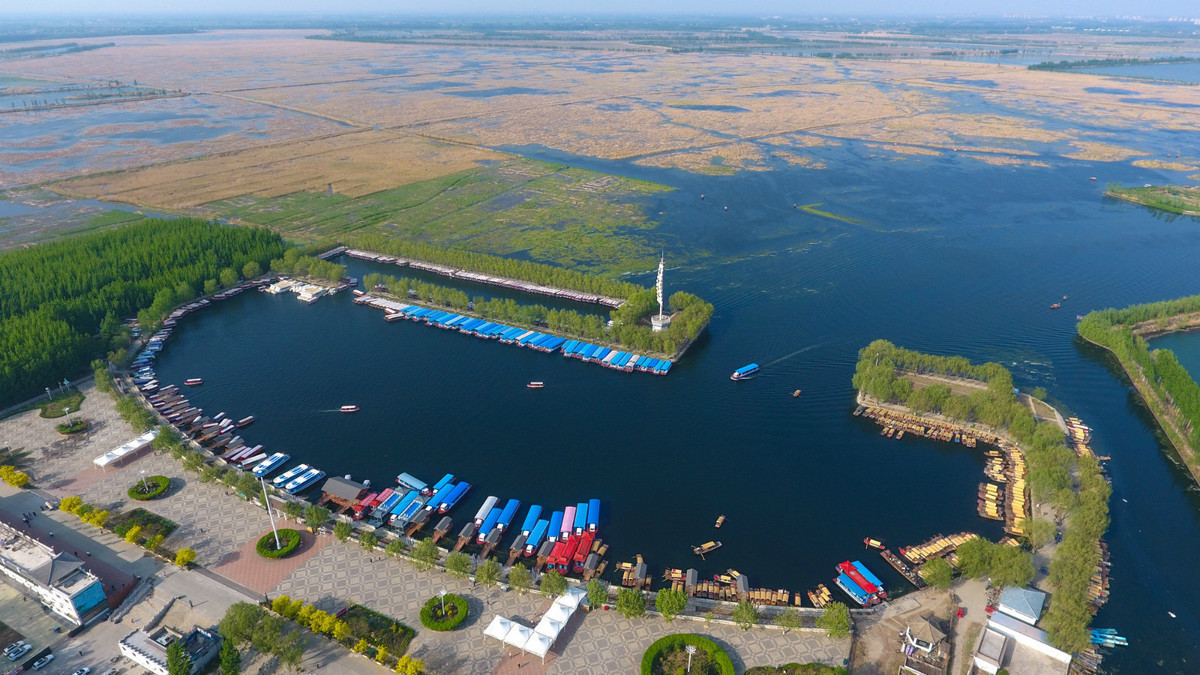 The integrated development of the Beijing-Tianjin-Hebei region has secured some early outcomes, especially in the integration of transportation networks.

In addition to the train between Beijing and Xiong'an, a high-speed railway line connecting Beijing and Zhangjiakou, the co-host city of the Beijing 2022 Winter Olympics, also began operating in late 2019.

Over the past seven years, a total of 32 expressways connecting cities in the region have been opened or expanded, stretching to a length of 2,005 kilometers.

In addition, Li's company has benefited from the integration drive.

His startup has benefited from Xiong'an's efforts to optimize its business environment, with the government outsourcing services to the company in areas such as the registration of new businesses and approvals for market access.

The company offered services to at least 1,500 companies that were registered in the new area and saw its turnover jump to 21 million yuan ($3.2 million) last year. It has also expanded its business scope from Xiong'an to Beijing's Haidian district, Tianjin and Hebei province.

"The growth of the new area is like the growing process of a human: It must first learn to crawl before walking and then competing on a racing track," Li said.

He added that the COVID-19 pandemic has not slowed the process of the area's development. Instead, a slew of landmark programs have been completed, and the public is starting to witness more tangible progress in its development.

"For the local residents, it is also a process of transitioning from farmers to urban dwellers, and they are starting to find opportunities for employment and starting new businesses," he said.

Zhou Jun, the founder and CEO of Beijing Eyecool Technology Co Ltd, a company that focuses on the development of biometric recognition technology, said the company's business has benefited from the integration of the three provincial-level areas, and especially from the development of Xiong'an.

The company relocated its headquarters from the capital to Xiong'an in 2018 in the belief that the area will be a smart city for the future.

"We realized that for artificial intelligence companies and the sector as whole, the development of the new area will be a historic opportunity," he said, adding that the company's multimodel biometric recognition technology fits strongly with the area's need to develop a smart city.

The company's technology has so far been applied to more than 20 innovation programs in Xiong'an, contributing to the development of a smart security system, parks, schools, relocation programs and the containment of COVID-19, he said.

"The building of smart parking facilities, street lamps and use of artificial intelligence in various areas has made the city smarter," he said.

According to the plan, a set of new policies and programs will be launched to transfer Beijing's noncapital functions to areas including Xiong'an, which will see quicker development in the next five years.

The industry and innovation chains between Beijing, Tianjin and Hebei will be better integrated, and a rail transit network connecting the three areas will be completed.

The plan also highlighted the need to better coordinate measures in air pollution control and prevent excessive exploitation of groundwater in the region.

Zhang, the Renmin University professor, said the nation's efforts to foster a new development paradigm, with the domestic market as the mainstay and the domestic and international markets reinforcing each other, will provide the most important window of opportunity for the integration of the three areas.

A primary challenge will be reinforcement of the integrated growth of the industry, supply and innovation chains and the enabling of their optimized distribution in the three areas, he said.

To drive the integration of the region, Beijing must lead the coordinated development in the area and amplify its role as a center for innovation in science and technology, an international hub for consumption and the center for the digital economy, he added.

Ye Zhenyu, a researcher on regional economy with the Chinese Academy of Social Sciences, highlighted the importance of employing market methods in promoting the transfer of noncapital functions from Beijing.

The three areas must expand the coverage of high-quality public services with the development of emerging technologies, and must continue narrowing the divide in the level of public services, he said.

Li, from Jingxiong Group, said Xiong'an should offer talent policies, including in the areas of social security, housing, education and healthcare, to get more people to relocate to the new area.

"With sound urban planning in place and the fostering of an enabling environment, we have enough reasons to believe that Xiong'an will become a new growth engine and a city built with international standards," he said.