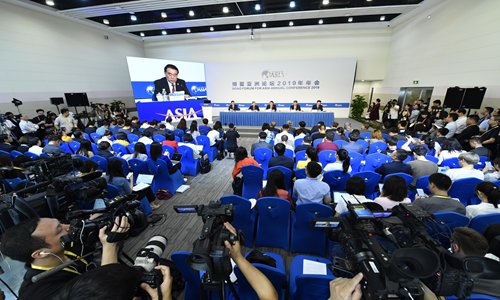 Against the backdrop of rising global trade protectionism, Asian economies have to integrate together to counter the global economic uncertainties, experts said during the 2019 Boao Forum for Asia (BFA), which is being held from Tuesday to Friday in Boao, South China's Hainan Province. To achieve that goal, Asia should increase efforts to further strengthen regional cooperation such as building regional trade organizations, they noted. During the 2019 Boao Forum for Asia, four reports - the Emerging Economies, Asian Economic Integration and Asian Competitiveness and newly created Asian Financial Development report on Infrastructure Finance - were released by the BFA Institute, the intellectual arm of the BFA, on Tuesday.At around 9 am on Tuesday morning, the Boao Forum for Asia Conference Center was already bustling with speakers, media members and staff of the conference center. Blue-colored boards with the logo and theme of this year's Boao Forum - Shared Future, Concerted Action, Common Development - could be seen at many areas in the conference center. Li Baodong, secretary general of the BFA, said at the press conference of BFA 2019 that the Asian economy remains relatively strong despite a slowdown of the emerging markets economy in general. Asia's emerging economies in 2018 have maintained a 6.5 percent growth rate, Li said.That is in contrast to the slower economic growth of the general emerging markets. According to figures revealed in the report of Emerging Economies on Tuesday, the E11, the 11 emerging economies including China, Brazil and India saw their GDP growth rate decline from 5.2 percent in 2017 to 5.1 percent in 2018. The report Development of Emerging Economies pointed out that the growth rate of the world economy in 2018 was largely unchanged from 2017. However, the trend of strong recovery in individual economies, for instance, the US, has not been sustained. According to the report, factors such as the prevailing trade and investment protectionism, uncertainties related to the evolution of the China-US trade disputes, the possibility of the US economy starting to weaken and spillover effect of the macroeconomic policy adjustments by developed countries will all have a negative impact on the future economic growth of emerging markets. "We are facing trade policy tensions. If the US imposes 25 percent tariff, it will reduce 0.9 percent growth for Asia and even more for China," Zhang Tao, deputy managing director at the IMF, said on Tuesday at a BFA panel.  "It is the monetary policy of the US that causes concern. Whether the US monetary policy will swing back to neutral or even easing will greatly affect the global economy and especially the emerging countries' public debt," Zhang Yuyan, senior fellow and director of IWEP of the Chinese Academy of Social Sciences, said during the panel on Tuesday.Uncertainties have bound the Asian economies more closely together than ever by promoting the integration process. Seventeen new agreements were signed in 2017-2018 and 70 bilateral agreements are underway, according to the Progress of Asian Economic Integration Report.Asian countries have become more inseparable in trade and investment. The domestic value added in Asian economies' exports has boomed, with China contributing the most. From 2010 to 2017, domestic value added in exports of Vietnam increased 14.5 percent, for Cambodia the rate was 14.4 percent and India 7.8 percent. Intra-Asia inward FDI dependence index increased for four consecutive years and recorded at 54.65 percent in 2017, compared to 52 percent the previous year, the Progress of Asian Economic Integration Report showed. "The key to dealing with uncertainties is to cooperate," Hans-Paul Burkner, chairman of Boston Consulting Group, told the Global Times on Tuesday. "What Asia can do is to further integrate Asian economy. This is a better way and this has proved to be the better way," Zhang Tao, deputy managing director at the IMF, told the Global Times. To fight with uncertainties, Asia also needs to try everything to support innovations. Innovation generates variety of technologies that provide opportunities. In the past two decades, ICT new technologies have taken up 30 percent of average economic growth. Zhang said. "The best way to address uncertainty is to create certainty, which will include boosting international cooperation, innovation of the enterprises and learning by individuals. Asian countries need to continue joint efforts to build a regional trade organization," Zhang Yuyan told the Global Times on Tuesday.